This article covers the steel company after reorganization in 1952. For the local subsidiary prior to that, see Tennessee Coal, Iron and Railroad Company. 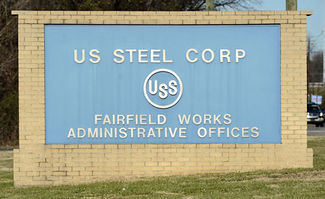 Sign outside the U.S. Steel Administrative Offices at Fairfield Works

The United States Steel Corporation is a steel producer based in Pittsburgh, Pennsylvania which has had significant production facilities in the Birmingham District since it acquired controlling interest in the Tennessee Coal, Iron and Railroad Company (TCI) in 1907. The company itself was founded in 1901 when banker J. P. Morgan engineered the merger of the Carnegie Steel Company, Federal Steel Company, National Steel Company.

TCI operated as a subsidiary of U.S. Steel until it was absorbed as a division of the parent company in 1952. Under Pittsburgh ownership, TCI operated the massive Ensley Works and constructed the Fairfield Works in the planned community of Fairfield. The TCI subsidiary, bolstered by capital and executive leadership from U.S. Steel, proved to be so efficient at making cheap steel that the company levied an internal tariff (the 'Pittsburgh Tariff') in 1909 in an effort to prevent the Birmingham product from undercutting the profitability of the Pittsburgh mills.

In 1925 TCI completed the High Ore Line Railroad, providing a direct supply route from its iron ore mines at Wenonah to the furnaces in Fairfield.

The company moved its headquarters offices from the Brown-Marx Building in downtown Birmingham to the Flintridge Building in Fairfield in 1951. In 1964 the company consolidated most of its higher-level administrative offices in Pittsburgh. In that same decade, U.S. Steel closed down most of its mining operations and began importing ores and fuels from overseas.

The corporation was re-organized as USX in 1986, after diversifying into petroleum with the acquisition of Marathon Oil and into real estate development of former mining properties. Those businesses were spun off in 2001.

At its peak during World War II, U.S. Steel employed more than 45,000 workers in the Birmingham District. 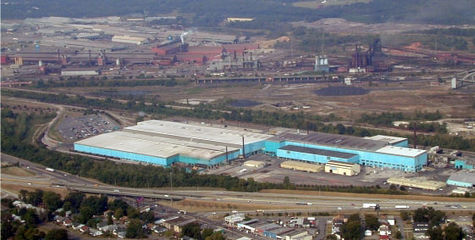 Until 2015 the company operated the Fairfield Works, one of its five integrated steel mills, manufacturing hot-rolled, cold-rolled and coated sheet products; and Fairfield Tubular Operations, which manufactures seamless steel pipe.

U.S. Steel shut down its Birmingham blast furnace in late 2015, idling around 1,100 workers. At the time, there were plans to construct a new electric arc furnace that would employ about 300 in production of steel from recycled materials for use in the pipe mill, but those plans were tabled due to low demand from energy companies for steel tubular products.