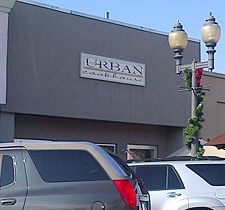 Urban Cookhouse is an eatery which serves sandwiches and salads with four locations in the Birmingham District.

The casual dining restaurant's original location, located at 2846 18th Street South in Homewood, was opened by Andrea and David Snyder, veterans of Zoe's Kitchen, in June 2010. The interior design is sleek modern, with 50 seats inside and seating available on the sidewalk outside, and communal dining is encouraged.

A second location of Urban Cookhouse, managed by Breanne Kostyk, opened at The Summit in 2011. In 2013 the Snyders partnered with Will Gillespie to grow the brand throughout the Southeast, and opened a third location that April in the former Fire Restaurant space in Mountain Brook's Crestline Village. A location in Downtown Birmingham was opened in 2017 at 1801 5th Avenue North in 3,600 square feet of the lobby of the historic Federal Reserve building.

By 2020 the restaurant had locations in Tuscaloosa, including both a brick and mortar and a food truck, as well as Montgomery, Huntsville, Nashville, and Columbia, South Carolina.