Zoë's Kitchen is a "fast casual" restaurant chain which peaked at 261 locations across the country. The restaurant features fresh-made Greek-inspired meals for dine in and take out. The company is controlled by Brentwood Associates, a Los Angeles, California-based investment firm. The restaurant chain's main office is located at 2901 2nd Avenue South in the Martin Biscuit Building at Pepper Place.

The first Zoë's was opened in 1995 by Marcus and Zoë Cassimus in a 900-square-foot space in downtown Birmingham. The couple later relocated to Homewood. In 1999 the Cassimus' son, John approached them to propose expanding the business. He purchased the development rights with partner Archie Andrews and brought in CFO Kasey Burleson. They opened a second location in Riverchase and, within four years, the chain had six locations, including restaurants in Tuscaloosa and Nashville, Tennessee.

The chain replaced its hand-painted chicken logo with a bright new corporate identity and prototype interior designed by Chute Gerdeman of Columbus, Ohio. Local schoolchildren provide artwork to decorate the interiors. The redesign debuted in the chain's flagship store in One Federal Place in 2003.

In late October 2007 Cassimus sold a majority stake in the business to Brentwood Associates. Cassimus remained CEO while Greg Dollarhyde, formerly of Baja Fresh Mexican Grill, became chairman. After the sale, Cassimus expressed hopes that the company would be able to open as many as 200 locations across the South and Southwest over the next five years. Dollarhyde was named CEO after Cassimus stepped down in November 2008. Trey Hornsby was appointed COO to manage day-to-day operations in Birmingham. Kevin Miles, another Baja Fresh veteran, was appointed president in March 2011.

In April 2008 the company received a $1 million equity investment and a $10 million revolver loan from GE Capital Solutions Franchise Finance which enabled it to launch as many as 180 new locations over the next five years. 18 of those were set to open by December 2009 including locations in existing markets in Alabama, Arizona and Tennessee as well as Charlotte and Raleigh, North Carolina; Richmond, Virginia; Washington D. C.; Baltimore, Maryland; Austin, Texas; and Denver, Colorado.

Zoe's Kitchen quietly moved its headquarters offices to Plano, Texas between 2011 and 2013 as it prepared take the company public. Its filing for an initial public offering took place in March 2014. By January 2018 the chain had 247 locations in 20 states. It had expanded to 261 locations when it was acquired by CAVA Group Inc. of Washington D.C. in fall 2018 for $300 million. Over the next two years the number of Zoe's Kitchen locations dropped to 176 while the number of CAVA locations, which feature a "build-your-own" Mediterranean concept, increased from 66 to 112. In 2021 CAVA began converting many of its Zoe's Kitchen locations into CAVA, which it considers its "growth brand". 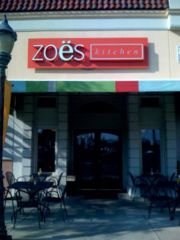