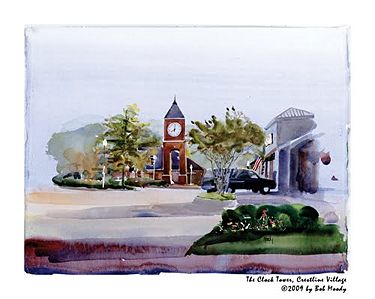 Ben Levio's Club Village Market was one of the first commercial strips to be built in the vicinity. A. D. Brown opened a hardware store nearby and the Waters Theater Company bought two lots for a planned movie theater in 1946. John Strange developed the Crestline Heights Shopping Center, which opened with an A&P Super Market and three other tenants in 1947. A New Crestline Heights Shopping Center developed by Joe Scotch brought seven tenants to Oak Street in 1955. The Emmet O'Neal Library was constructed in 1965 and a new Mountain Brook City Hall was completed in 1967. Crestline Elementary School was completed in 1973.

In 1995 Mountain Brook hired Nimrod Long and Associates to develop streetscape improvements for all three villages. The Crestline Village Clock Tower and a landscaped plaza in front of City Hall were added at that time. The library was replaced with a new 40,000 square-foot building in 2001. A new headquarters building for the Mountain Brook Board of Education was completed in 2007. In 2010 City Hall and the original fire station were demolished to make way for a new Mountain Brook Municipal Complex.