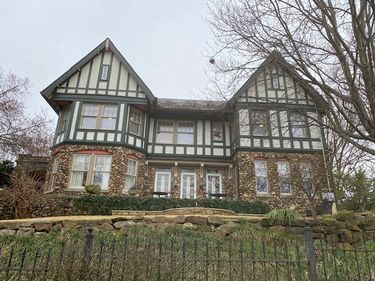 The Viola Roden-Redin residence, also known as the Redin-Cohen House or Octavus Roy Cohen House, is a two-story, twin-gabled Tudor-revival style house at 3225 Cliff Road, on the southwest corner of the intersection with 33rd Street South in Birmingham's Highland Park neighborhood. It is a contributing structure to the Country Club Historic District.

The house was was originally addressed as 1256 Whitaker Street (now 33rd Street). The ground floor is veneered with local fieldstone while the upper floor is clad in brick with applied half-timber details. The gabled ends are stuccoed with half-timbering. On the east side, facing 33rd Street, there is a covered porch with dressed stone arches and a cross-gable above. The roof is varicolored slate. The front yard features a sunken fountain.

The house was constructed around 1918 by Viola Roden-Redin, daughter of Benjamin Roden. She and her sisters controlled several parcels in the area. Mrs Roden-Redin spent most of her time in California, and in 1920 sailed to Paris for an indefinite stay. She sold the house to M. B. and Clema Eiseman. They sold it, in turn, to writer Octavus Roy Cohen in 1923.

Cohen and his wife Inez occupied the house until he moved to Los Angeles, California to pursue a screenwriting career in the mid 1930s. They sold the house in 1937 to Allen and Mary Harris Wood. The Woods sold it to Nick Jones, founder of the UAB Department of Obstetrics and Gynecology, and his wife, Geneva.