Vulcan with his neon torch

Vulcan's torch, sometimes called the Light for Life, was an illuminated beacon constructed over the spearhead in the Vulcan statue's right hand. It was designed to serve as the focus of a traffic safety campaign planned by the Birmingham Jaycees. The beacon was intended to take the form of a torch, but to many it resembled a "neon popsicle".

The concept of using a color-coded beacon was first proposed by R. Paul Moon, who chaired a safety committee for the Jaycees. The neon lights would glow green until a traffic fatality was reported, and then turn red for 24 hours as a warning to others. Moon's initial idea was to mount the beacon atop a tall flagpole outside the West End Library. Someone else suggested that the roof of the downtown Comer Building would be more visible. Then came the suggestion that employing Vulcan as the bearer of the beacon would combine high visibility with the sculpture's Olympian authority.

Jaycee's president Clarence Boggan brought the idea to the Birmingham Park & Recreation Board, which referred it to an ad hoc committee of Mrs Sharp and Mr Beck. The proposal was for the torch to be installed temporarily, and removed at the conclusion of the safety campaign. Fund-raising for the construction of the torch was led by Moon and his co-chairs George Seibels and Walter Nichols. J. L. Glasser obtained the final approvals needed from the Park Board while the Alabama Neon Sign Company designed and engineered the torch itself.

The torch was designed to wrap around the existing "arrow" or "thunderbolt" (itself a replacement for the original spearpoint, lost during the statue's move to Birmingham from St Louis in 1905.) The truncated cone-shaped metal shroud was mounted so that it could be rotated, allowing access to all of sixteen neon tubes from one accessible location. In order for workmen to reach the statue's arm, metal climbing rungs were welded to Vulcan's left hip and chest. A cable attached to his right hand provided the means to scale the arm. Some reported that the workers would climb through the inside of the statue and reach the torch from an access panel in the hand, but the size of the casting and the fact that the statue was filled chest-high with concrete makes that version very unlikely.

Ralph Fesperman was the sign company employee that performed the installation of the torch. He scaled the statue without any harnesses, provoking fears from the Jaycees watching from below that their "Safety Campaign" could well be aborted by an ironic tragedy. Fesperman brushed aside Moon's repeated concerns for his security and completed the work without incident. The switch controlling the color of the beacon was installed in the guard's room at the base of the tower.

The traffic safety light was first lit at a dedication ceremony on October 23, 1946 and remained green for nine days, signaling its first fatality on November 1 of that year after a woman died in a collision nearby in Southside. The beacon was very popular and was publicized worldwide, receiving inquiries from across the United States and in Europe. It was also counted as successful in reducing traffic fatalities, which were significantly lower in 1947. The decision was soon made to keep the beacon up indefinitely and a plaque was installed in 1947. Moon was joined at the ceremony by Seibels, Birmingham City Commission president Jimmy Morgan, Jefferson County Commission president Clarence Pinson, Park Board president Jim Downey and his daughter, Paula, who unveiled the plaque. 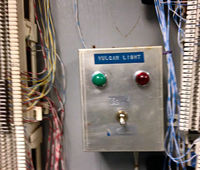 Radio newsman Davenport Smith took to signing on by saying "Vulcan's light burns green tonight — keep it that way!" The Jefferson County Safety Committee established a county-wide Vulcan Safety Club beginning in 1947. At some point after Birmingham Police Department dispatch services began operating out of the newly-built Birmingham City Hall on Woodrow Wilson Park a master switch for "Vulcan's Light" was installed there.

In 1955, at the suggestion of McEdward Nolan, the image of Vulcan with his green torch was incorporated into the Alabama Jaycees state-wide safety campaign emblem, which appeared on highway signs visible when entering cities across Alabama.

For the week of February 17–24, 1963 the torch was turned red for heart disease deaths rather than traffic fatalities as a show of support for the Heart Fund Drive.

In 1969 during early discussions of planned renovations of Vulcan Park for the Centennial of Birmingham, it was proposed to install a natural gas torch in place of the neon. That suggestion was not pursued.

In September 1979 strong sustained winds from Hurricane Frederic damaged the lights, and they remained dark until twelve months later when repairs were completed. On October 17, 1980 a third set of neon tubes, yellow in color, were added so that the torch could be illuminated as part of a nationwide vigil for the 52 Americans taken hostage at the United States embassy in Tehran, Iran nearly a year before. The wife of one of the hostages traveled to Birmingham from Washington D.C. to throw the switch.

By December 1982 the neon torch had become unreliable due to damaged or crossed wires or malfunctioning controls. The red, green and yellow lights would flash on and off unpredictably. The Park Board decided to darken the torch in April 1983. Repairs lasted for another month.

In June 1985 Birmingham City Council member Russell Yarbrough suggested re-lighting the yellow tubes to show support for another group of hostages from TWA Flight 847 which was hijacked shortly after take-off from Athens, Greece. He estimated the cost at $3,000. City officials determined that the still-haphazard lighting installation was too unreliable already without the third function. 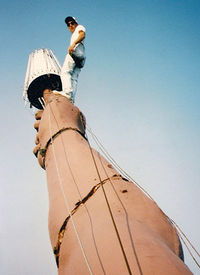 Barry Crick working on the torch in 1996

Barry Crick was one of the last workers employed to service the torch, making numerous climbs from 1996 to 1999. According to George Seibels, the torch was lit red 2,300 times and green 22,000 times during its time in service.

By the time the Vulcan statue was dismantled for repairs in 1999 increases in traffic led to the torch burning red more often than green. The goal of the restoration of the statue was to recreate the artistic achievement of its creator, Giuseppe Moretti, as closely as possible. As conceived by the artist, Vulcan is portrayed in the act of examining his just-completed spear, sighting its lines as he holds it to the sky. To that end Robinson Iron was tasked with re-creating Vulcan's original 12-foot-long spear point. That decision, informed by the Birmingham Historical Society and voiced by Marjorie White and Philip Morris, was also fundamental to the plan submitted to the Department of the Interior to apply for federal grants. It was not, however, popular with residents accustomed to looking for the color of Vulcan's torch, nor with George Seibels, who spoke out, saying that, "it would be a total disaster to even consider taking the torch down."

The torch was removed from the statue, but was also restored and installed inside the park's Visitors Center as an interactive exhibit helping tell the story of Vulcan's long career. Visitors can press a button to illuminate the torch with green neon. No red tubes were installed in the restored light.