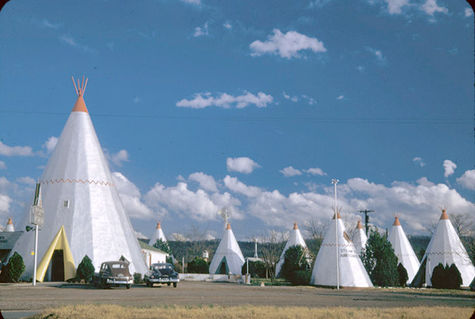 The Wigwam Village No. 5 was a tourist court which opened on Bessemer Super Highway (U. S. Highway 11) about 4 miles north of downtown Bessemer in 1941. It was the fifth in a chain of seven such tourist courts developed by Frank Redford of Horse Cave, Kentucky. Bessemer's wigwam village was operated by J. W. Davidson, and later by Judge & Mrs Willis Staton.

Redford built his first teepee-shaped restaurant in Horse Cave in the early 1930s and added 15 smaller guest-cabins in a horseshoe around it in 1933. He patented his "wigwam village" concept in 1936 and built a second one in Cave City, Kentucky a year later. He then sold the blueprint to other operators. The third development was in New Orleans, Louisiana and the fourth, a larger version with 31 teepees, was constructed in Orlando, Florida. 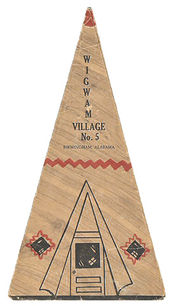 Birmingham's Wigwam Village opened in 1941 on the newly-opened Bessemer Super Highway just north of the Valley Creek bridge. It was constructed by W. C. Looney. Later villages were opened in Holbrook, Arizona; Rialto, California. As part of the franchise agreement a coin-operated radio was installed in each room, with Redford collecting the coins as his commission.

The "village" consisted of a grouping of concrete "teepees", approximately 25' in diameter at the base. A larger teepee at the center served as a guest-registration office and cafe. The rooms were insulated and featured Native American themed hickory furniture and decor and complete baths. The exteriors were coated in aluminum paint with red zig-zag graphics. The cafe menu was printed on teepee-shaped paper. It featured all-day breakfast specials ranging from 35¢ to 50¢ and dinner specials from 40¢ to $1.10.

The wigwam village closed in 1964. The large tepee remained as an advertisement for a used car lot, but the entire site was razed around 1970.