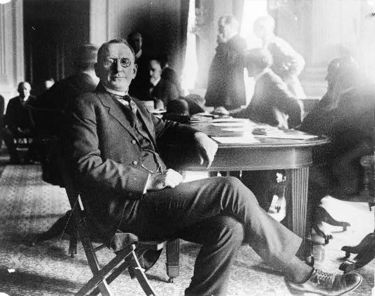 Simmons was the son of Calvin Henry and Lavonia David Simmons of Harpersville. He served in the Spanish-American War and later claimed to have studied medicine at Johns Hopkins University in Baltimore, Maryland. He became a preacher for the Methodist Episcopal Church, South but was suspended by the church in 1912 for inefficiency. Simmons moved to Atlanta, Georgia and became a member of two churches and twelve different fraternal organizations. 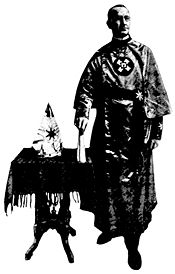 Convalescing after being hit by an automobile in 1915, Simmons concerned himself with rebuilding the Ku Klux Klan, inspired by Thomas Dixon's 1905 book "The Clansman" and the stirring depictions of masked riders in D. W. Griffith's newly released film The Birth of a Nation. He obtained a copy of the Reconstruction Klan's "Prescript," and used it to write his own prospectus for a reincarnation of the organization.

He delayed his plans until the lynching of Jewish factory superintendent Leo Frank, the accused murderer of former worker Mary Phagan in Atlanta. A group of 28 men calling themselves the "Knights of Mary Phagan" took Frank from a Milledgeville prison on the night of August 16 and hanged him from a tree near Phagan's former home just east of Marietta. The Knights celebrated two months later by burning a massive wooden cross on the summit of Stone Mountain. Simmons recruited men from that group and two elderly veterans of the original clan and returned to Stone Mountain on Thanksgiving eve to burn another cross inaugurating the Invisible Empire of the Knights of the Ku Klux Klan with Simmons as Imperial Wizard.

In the first years of the new Klan just several thousand members enrolled. The Klan identified African-Americans, Jews, Roman Catholics and other non-Anglo immigrants as its enemies and engaged in a range of tactics to combat their influence in the United States. Simmons hired the Southern Publicity Association of Atlanta to spread their message and bolster membership. He personally established the Robert E. Lee Klan No. 1 klavern in Birmingham in 1916.

Called before the U.S. House Committee on Rules in October 1921 to testify regarding reports of organized Klan violence published in the New York World, Simmons emphasized the fraternal aspects of the organization and distanced himself from any violence. Those hearings produced no official action, but had the unintended consequence of publicizing the Klan movement, which grew rapidly across the country. The sudden explosion of Klan membership coincided with Simmons' loss of influence. Hiram Wesley Evans succeeded him as Imperial Wizard in November 1922. Simmons, effectively retired, was given the title of Emperor for life.