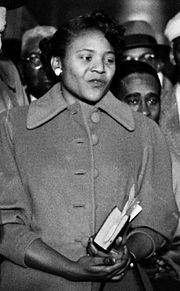 Autherine Lucy in 1956. Photo by Joe Scherschel for LIFE

Autherine Juanita Lucy Foster (born October 5, 1929 in Shiloh, Marengo County) was the first black student to attend the University of Alabama, in 1956.

Lucy graduated from Linden Academy in Marengo County in 1947, and went on to attend Selma University in Selma, and the all-black Miles College in Fairfield, where she graduated with a Bachelor of Arts in English in 1952.

Later in 1952, she decided to attend the University of Alabama as a graduate student but, knowing that admission would be difficult due to the University's admission policies,she and a friend, Polly Anne Myers, approached the National Association for the Advancement of Colored People (NAACP) for help. Thurgood Marshall, Constance Baker Motley, and Arthur Shores were assigned to be her attorneys. While they started preparing her case, she worked as a secretary. Court action began in July 1953.

On June 29, 1955, the NAACP secured a court order preventing the University from rejecting the admission applications of Lucy and her friend based upon their race. Days later, the court amended the order to apply to all other African-American students seeking admission. The Supreme Court of the United States upheld this on October 10, 1955. On February 3, 1956, Lucy enrolled as a graduate student in library science. Myers, however, had reconsidered the situation and withdrew her application.

On the third day of classes, a hostile mob assembled to prevent Lucy from attending classes. The police were called to secure her admission but, that evening, the University suspended Lucy on the grounds that it could not provide a safe environment.

Lucy and her attorneys filed suit against the University to have the suspension overturned. However, this suit was not successful and was used as a justification for her permanent expulsion. University officials claimed that Lucy had slandered the university and they could not have her as a student.

The University of Alabama finally overturned her expulsion in 1980, and in 1992, she earned her Masters degree in Elementary Education from the University that she had applied to decades earlier.

She is a sister of the Zeta Phi Beta sorority.