Birmingham Branch of the Federal Reserve Bank of Atlanta 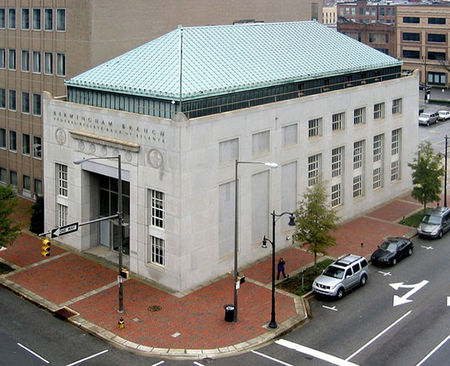 The new 183,000 square foot, $40 million building, designed by Miami architects Spillis Candela & Partners, sits on an 11 acre site adjacent to the Greater Alabama Council of Boy Scouts building. It was constructed by Holder Construction and H. J. Russell & Co. of Atlanta. Other sites evaluated at the time were at Grandview and the Colonnade.

At the dedication of the new building, Federal Reserve Board Chairman Alan Greenspan noted that "Buildings such as this new Birmingham Branch, employing the most modern technologies, are central to the Federal Reserve System's continued fulfillment of the basic purposes and functions for which it was founded more than 80 years ago." The building is equipped with advanced cash and check processing equipment including automated storage and retrieval, high speed check sorters, high speed currency processors and automated guided vehicles fully capable of processing and storing the bank's average daily volume of 1.2 million currency notes and 1.8 million checks.

In March 2005, check processing operations were consolidated to the main office in Atlanta, eliminating about 70 jobs in Birmingham. An internal review spurred by the terrorist attacks of September 11, 2001 recommended that the Federal Reserve store cash reserves at commercial banks among other policy changes, reducing the need for Birmingham's state-of-the-art secure vault.

In 2006 the Federal Reserve announced that an additional 54 jobs in cash processing would be eliminated from the Birmingham branch, leaving a staff of about 25 to supervise continuing services to the community and to state banks. Just over half of the building will become available for lease. Possible tenants that could use the vault include armored carriers and "the guy who runs 'The Apprentice'", according to Chief Operating Officer Pat Barron. The bank is negotiating with Loomis Fargo to take over its cash depot function.

Tours of the Liberty Park facility are possible during business hours by appointment.

The board members of the Birmingham branch, appointed in January 2007 to two year terms, are F. Michael Reilly of Tuscaloosa, Bobby Bradley of Huntsville, and Samuel Dodson of Birmingham. The office's manager is Julius Weyman, who replaced Lee Jones in 2008.