This article is about the subdivision in Vestavia Hills. For the former park in Pratt City, see Liberty Park (Pratt City). 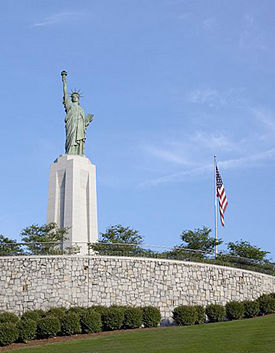 Entrance to Liberty Park from I-459

Liberty Park is a 4,000-acre residential and mixed-use subdivision in Vestavia Hills located between Sicard Hollow Road and the Cahaba River south of Irondale and east of Mountain Brook. Developed as a joint venture with Drummond Company and Torchmark, successor of the Liberty National Life Insurance Company that lent the development its name. The entrance to the property from I-459 is marked with the 1/5th-scale Statue of Liberty that formerly crowned the Liberty National Building in downtown Birmingham.

The development's "Urban Center", near the I-459 exit, was developed primarily by Stonegate Realty and includes large office buildings and retail centers. The residential section, with more than 2,000 single-family homes, spreads eastward toward Grants Mill Road. The highest-value estate homes occupy the forested slopes around the private Old Overton Golf Club and are protected by gated entrances, while more densely-sited homes and apartments are clustered along Liberty Parkway on the south edge of the site.

The developers had originally hoped that the adjacent city of Mountain Brook would annex the development, but residents opposed the idea. Instead, they turned to Vestavia Hills, whose limits, before the annexation of Cahaba Heights, were nearly three miles distant. A state law passed in 1992 allowed for the controversial annexation and survived a legal challenge mounted by the City of Birmingham which reached the Alabama Supreme Court in 1995. A proposed regional Liberty Park Mall was never realized. 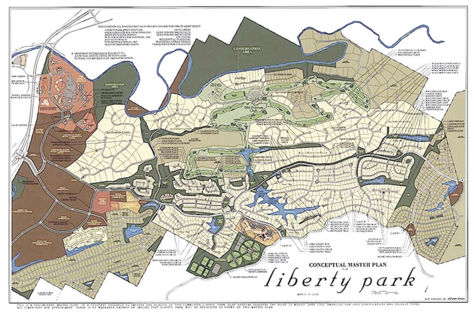