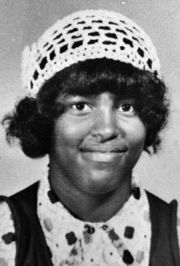 Bonita Beatrice Carter (born January 26, 1959; died June 22, 1979 in Birmingham) was twenty years old and living with her parents when she was shot by Birmingham police officer George Sands, responding to an altercation at Jerry's Convenience Store at 4500 10th Avenue North in the Stockham section of Birmingham's Kingston neighborhood.

Carter was one of nine siblings. She graduated from Hayes High School and sang in the choir at Parker Memorial Baptist Church. She lived with her parents near the convenience store where she was killed. She was acquainted with a man who had been arguing with the store's clerk, and had offered to move his car. She was behind the wheel when Sands arrived on the scene and shot her. Though she was shot several times at close range, a citizen review board ruled that Sands' actions were justified.

That finding, and Mayor David Vann's subsequent support for Sands, who already had as many as six outstanding complaints for excessive force, provoked mass demonstrations and reignited protests against suspected systematic brutality against African Americans. The Kingston neighborhood itself became ground zero for people on both sides of the issue looking to make trouble. Guns were fired into the air, one person was injured by a thrown brick and several people were arrested in the area. A group of 50 whites, including members of the Ku Klux Klan confronted 25 picketers at a store owned by Jerry Huff, who also owned the store where Carter was shot. Police kept the groups separated, though taunts and slurs continued to be hurled.

Sands was supported by the Fraternal Order of Police Birmingham Lodge No. 1 as well as the Ku Klux Klan. Tensions rose as a group of white citizens brandishing arms drove through Kingston to show support for Sands. Residents armed themselves, raising the threat of an all-out riot. The city won a court order from judge William Barber to keep groups of more than three from demonstrating in the neighborhood.

The case was largely credited with undercutting support for Vann in the black community and making it possible for Birmingham City Councilor Richard Arrington Jr, who had made police brutality an issue while on the Council, to launch a successful bid to become the city's first African American mayor.

Carter's death features prominently in the documentary film Iron Grit about Arrington's rise to power. A small memorial sign placed outside the site of the shooting was replaced in October 2019 with a new descriptive plaque. In late 2020 Carter's death was the subject of a 6-part Reckon Radio podcast, "Unjustifiable".