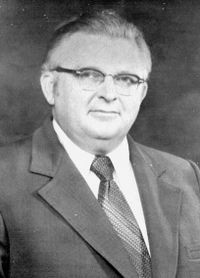 David Johnson Vann (born August 10, 1928 in Roanoke, Randolph County; died June 9, 2000 in Birmingham) was the 24th Mayor of Birmingham, in office from 1975 to 1979. He continued to serve the city as special counsel to his successor, Richard Arrington, Jr and helped arrange numerous annexations of land into the city during the 1980s.

Vann was the son of Clyde H. and Ruth (Johnson) Vann of Roanoke. After his father's death, he moved with his mother to Auburn and attended Auburn High School. After graduating he enrolled at the University of Alabama, but interrupted his schooling to serve as a criminal investigator for the U.S. Army from 1946 to 1947. He earned a bachelor of laws at Alabama in 1951 and a master of laws at George Washington University in St Louis, Missouri in 1953.

Vann spent two more years in the Army as a first lieutenant in counter-intelligence, before beginning his law career in the office of general counsel for the National Labor Relations Board in 1953. He was clerking for United States Supreme Court Justice Hugo Black in 1954 when the court handed down its landmark decision on school segregation in the case of Brown v. Board of Education.

Vann returned to Birmingham after completing his term as clerk and joined the firm of Bradley, Arant, All and Rose, leaving in 1963 to form his own partnership, Vann & Patrick, which soon joined with the established firm of Berkowitz & Lefkovits to former Berkowitz, Lefkovits, Vann, Patrick & Smith in 1965. Vann filed a lawsuit that forced changes in Alabama's legislative districting and. as president of the Young Men's Business Club, was one of the leaders who helped organize the 1962 Birmingham special election to change Birmingham's form of government. The vote effectively ended Bull Connor's reign as Commissioner of Public Safety and ushered Albert Boutwell into the mayor's office. Vann served as a special assistant to Boutwell during his term. He married the former Lillian Foscue of Coatopa on April 24, 1965. 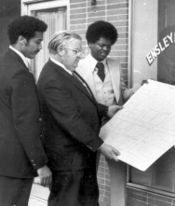 Vann was a plaintiff and attorney of record on the landmark Reynolds v. Sims case that resulted in the U.S. Supreme Court establishing a "one man, one vote" principle. In 1971 Vann won an at-large seat on the Birmingham City Council. He was one of the leaders of the failed "One Great City" campaign aimed at merging Birmingham and its suburbs under a single county-wide municipal government.

In 1975, with the endorsement of fellow Councilor Richard Arrington Jr, Vann was elected Mayor by a slim margin. He served one term and was generally considered to be an intelligent administrator, but perhaps not a fast mover. He supported efforts by attorney Ed Meyerson to attract the Buffalo Braves NBA team to Birmingham. The team moved to San Diego, California and became the Clippers instead. 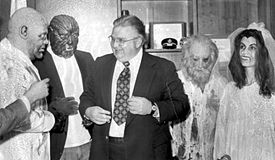 Vann was defeated in the 1979 Birmingham mayoral election by Arrington himself, who became the first African American mayor of Birmingham. The 1979 election followed closely on the heels of the controversial shooting of Bonita Carter by Birmingham Police Officer George Sand. Vann's handling of controversy exposed deep divisions in the city and is credited for neutralizing his support among Blacks while at the same time angering many in the white community. Despite $70,000 in campaign funds, he finished fourth in the race, behind Arrington, Frank Parsons, and John Katopodis. During the runoff between Arrington and Parsons, Vann made no endorsements, but did make known his intention of voting for Arrington.

Beginning in 1980 Vann worked as a lobbyist and special counsel to Arrington. He helped lead the mayor's aggressive annexation campaign and also served two terms as chair of the Birmingham Water Works Board before resigning in 1991. He was also a founding board member of the Birmingham Civil Rights Insitute.

Vann resided at 4201 Cliff Road. He died in Birmingham in June 2000. The David J. Vann Municipal Justice Center is named in his honor. Birmingham News columnist John Archibald ranked him as the city's best mayor since 1963 in a November 2009 column. He was inducted into the Alabama Lawyers' Hall of Fame class of 2012.