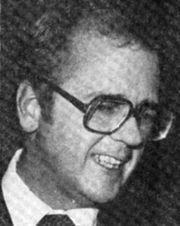 Frank Ray Parsons (born June 8, 1941; died July 1, 2013 in Birmingham) was an attorney and travel agent and also a civic leader and a candidate for Mayor of Birmingham in the 1979 Birmingham municipal election.

Parsons was the son of Frank Lee and Kate C. Parsons. He attended the Baylor Military Academy and completed his undergraduate studies and law degree at the University of Alabama, where he was also a member of the college tennis team. He practiced as an attorney for more than fifty years and also operated a tour service.

Parsons was active in charitable affairs. He served as a deacon at McElwain Baptist Church and participated in overseas mission trips to Israel, Africa and Ireland. He was a state president and national vice-president of the Jaycees, and also president of United Cerebral Palsy and the March of Dimes. He served on the board of The King's Ranch and represented it during the departure of founder Tom Owen in 1990.

In civic affairs, Parson was an officer for his neighborhood association, chaired the Birmingham Bicentennial Committee, and served on the board of the Birmingham Housing Authority.

Parsons had no political experience when he entered the Birmingham mayoral race in 1979, running against incumbent David Vann. With 16% of the votes, he narrowly edged out Councilman John Katapodis for a place in the run-off against Richard Arrington Jr, an African-American who claimed 44% of the votes. Arrington was ultimately able to attract enough white voters to the polls to edge out Parsons in the run-off, this becoming the city's first black mayor.

Parsons died from ALS (Lou Gehrig's Disease) in 2013. He was survived by his wife, Nona, three children and eight grandchildren.