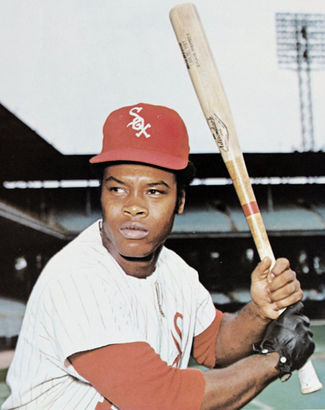 Carlos May (born May 17, 1948 in Birmingham) is a professional baseball player who played for the Chicago White Sox through most of his career, and also the New York Yankees and California Angels. He also played four seasons in Japan, from 1978 until 1981, for the Nankai Hawks. He batted left-handed and threw right-handed. May played for Parker High School and was drafted in the first round of the 1966 Amateur Draft. He is currently a community relations representative for the White Sox. Carlos is the younger brother of former first baseman Lee May.

May began his major league career on September 6, 1968, but did not have his first full year until 1970. In 1969, he suffered an injury while in the Marine Reserves, blowing off his thumb. He won The Sporting News Rookie of the Year Award, but lost to Lou Piniella for baseball's rookie of the year award. In 1970, as the White Sox' full-time left fielder, he had a good breakout season, batting .285 with 12 home runs and 68 RBIs. However, the White Sox had a miserable year, finishing 50 games under .500 and in last place in the American League, 42 games out of first place. In 1971 he batted .294 with 70 RBIs while playing regularly at first base for the only time in his career. He would move back to the outfield after an offseason trade that brought the White Sox superstar Dick Allen.

Throughout the early 1970s, May continued to help the White Sox improve as a solid everyday starter for them. In 1972, he hit .308 and had 28 stolen bases, which would both end up his career-highs in the respective categories. That year, Chicago finished in 2nd place in the AL, behind only the Oakland Athletics. In 1973 he collected 20 home runs and 96 RBIs, which would end up his career highs in those categories.

May did get a crack at postseason play, but not with the White Sox. On May 18, 1976, he was traded to the Yankees for pitcher Ken Brett and fellow outfielder Rich Coggins. The deal was made while the Yankees were in a heated pennant race. That year, he hit .278 and the Yankees went to the World Series. During the ALCS, May went 2-for-10 with a double and a walk. In the World Series against the Cincinnati Reds, he did not get a hit in 9 at bats and ended up with a .105 batting average in the postseason.

After wearing number 29 as a rookie with the White Sox, May switched to the number 17 (his birthday) and wore it for the remainder of his White Sox career.