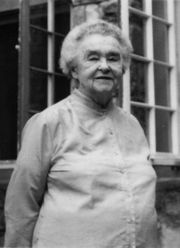 Carolyn Elizabeth Cortner Smith (born May 13, 1894 in Bedford County, Tennessee; died August 1, 1987 in Birmingham) is often thought to have been the first practicing female architect in Alabama.

Carolyn was the daughter of Robert George and Clara Ashford Sanders Cortner. She was raised in the Courtland community of Lawrence County, Alabama and attended Ward-Belmont College in Tennessee. She married Wilburn Blanks Smith in 1912. Her applications to study architecture at Yale, the University of Pennsylvania, and Auburn University were denied, so she obtained textbooks and course outlines and studied them on her own. She began practicing as an architect by 1913, but never obtained a license from the Alabama Board of Architects.

By 1920, Smith's reputation was sufficient for the Mars Family of Pulaski, Tennessee to put her in charge of designing their "Milky Way Farms". In addition to designing houses, she invested in lumber mills. During the Great Depression she was employed by the Civil Works Administration and Works Progress Administration, overseeing the restoration of the Old State Bank and designing a National Guard Armory and several phases of Delano Park in Decatur.

Smith was active in Altrusa International service club for professional women and served as president of the Birmingham chapter and as governor of the 3rd District. She helped organized "Operation Understanding" to promote interaction between American and British women's clubs. A frequent visitor to London, Smith had a special affinity for the Tudor style for houses and helped establish it both in Decatur and Mountain Brook.

Smith died in 1987 and is buried at Decatur City Cemetery in Decatur.