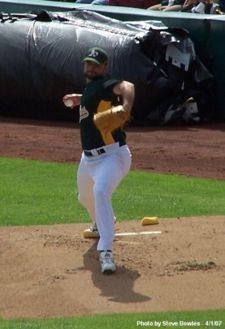 Robertson split the 2004 season between the Arizona League Athletics (rookie-level) and the Vancouver Canadians in Single-A. He appeared in 25 games for the Athletics and three games for Vancouver, all in relief, and posted a composite record of 2-2 and saved 13 games.

In 2005, Robertson made three stops, starting with the single-A Kane County Cougars, with whom he posted a 2-2 record and 2.93 ERA. He then moved on to the Stockton Ports, where he went 5-2 with a 2.76 ERA and was promoted to Triple-A Sacramento RiverCats (skipping Double-A), where he pitched in three games, tossing five innings. His composite 2005 numbers were a 7-4 record, with two saves, and a 2.76 ERA, striking out 120 and walking 40 in 75 innings.

Robertson pitched the entire 2006 season with the AA Midland RockHounds. He appeared in 55 games, winning seven of nine decisions, posted a 2.82 ERA, and fanned 97 batters in 83 innings. Robertson throws a hard, sinking fastball that has been clocked as high as 91 miles per hour. He also has a sweeping slider and a changeup.

On December 14, 2007, Robertson was traded to Arizona along with Dan Haren. After spending the first half of the season at Triple-A Tuscon, Arizona called him up to pitch in the Major Leagues on June 29, 2008. He made six appearances for the Diamondbacks, and then was traded to the New York Mets in the offseason for left-handed pitcher Scott Schoeneweis. The Mets sent him back to the minors, and released him after the 2009 season. He started for the Southern Maryland Blue Crabs of the independent Atlantic League in 2010, but did not play professionally after that season.

Robertson's brother David plays for the New York Yankees. David, 3 years younger, was called up by the Yankees the day before Connor, on June 28.