Once an NAIA powerhouse in baseball, basketball and soccer, the Panthers moved to NCAA Division I in 1999. After several struggling seasons in the Big South Conference, the college's board of directors decided to move all athletic programs from the scholarship-driven NCAA Division I to the non-scholarship Division III in the spring of 2006. The college's application to join the Division III Southern Collegiate Athletic Conference was approved by a vote of league presidents on June 7, 2006. A transition period of several years is expected before BSC will become a full member of the conference. On June 15, 2006, Athletic Director Joe Dean Jr announced that, owing to the number of scholarship athletes transferring elsewhere, BSC would not field teams in baseball or men's basketball for the 2006-07 academic year, meaning that for these sports, Division I participation was over.

Dean was promoted to senior vice president for advancement in 2016, and was succeeded by Kyndall Waters as athletic director.

Jan Weisberg is the current Panthers baseball coach. Brian Shoop coached the team for 17 years (1990-2006), including an NAIA National Championship in 2001, their final year before moving to the Division I Big South Conference. Shoop's teams won the Big South regular season championship in 2004 and 2006. Shoop and many of his scholarship players left for the UAB Blazers after the college moved to Division III non-scholarship athletics in 2006. The Panthers play their home games at Striplin Field on campus.

The men's team, coached from 1989 to 2006 by Duane Reboul, won two national championships while in the National Association of Intercollegiate Athletics (NAIA), in 1990 and 1995. In 1999, the Panthers moved to NCAA Division I, and was competitive in the Big South Conference from 2000 to 2006.

BSC moved back to non-scholarship athletics in 2006. With most of its players having transferred, the team did not play that fall. The Panthers are currently coached by Chris Graves, who succeeded Mitch Cole in 2011.

Brad Hodge has been the BSC Lady Panthers basketball coach since 2005.

The Panthers have been coached by Preston Goldfarb since 1983. Goldfarb's teams were perennial contenders for the NAIA championship, and were runner-ups in their first season of NCAA Divison I eligibility (2003). BSC was host to the NAIA national tournament in 1996 (at Legion Field) and on-campus in 1997 and 1998. 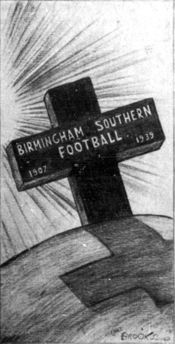 Birmingham-Southern first fielded a football team in 1918, coached by Baby Haynes. Charlie Brown coached the team from 1919 to 1923. Harold "Red" Drew was coach from 1924-1927. The all-time winningest coach in BSC history, Jenks Gillem led the Panthers to a 51-43-8 record in 12 seasons (1928 to 1939). Those teams competed in the Dixie League and played their home games at Munger Bowl, which is currently the site of the school's library.

After an almost seven decade absence, the Panthers fielded their first football team in 2007. Former Alabama Crimson Tide and Birmingham Stallions reciever Joey Jones was named the head football coach in 2006, after a successful high school coaching career. Jones built the team from scratch for the 2007 season. The Panthers went 1-7 in varsity play, and 2-0 in junior varsity games, with a team made up primarily of freshman and sophomore players. Jones left the program on February 14, 2008, accepting the first head coach position for the University of South Alabama. Assistant coach Eddie Garfinkle was tapped to lead the Panthers for the 2008 season.