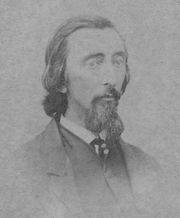 Redington was the first child born to Isaac Francis Redington and the former Sarah Jane Fisher. The family moved from Rising Sun, Indiana to Cincinnati, Ohio before 1849. Isaac was wounded by gunshot late that year and died in January 1850. Sarah, who had given birth to a second son, Isaac Jr, just a week after the shooting, returned to Indiana with her two children. She married Braxton Carter Porter there in 1855 and had five more children with him.

D. C. Redington began his career as a druggist, but pursued an interest in photography and was known to have made photographs during the Civil War. He married Louisa Coleman in 1863 and settled in Montgomery City, Missouri where his daughter, Louella, was born in 1868. From 1875 he pursued his photography business in cities across the country, including New York, New York; Chicago, Illinois; Cincinnati, Ohio; and Portland, Oregon. In addition to his photographs, he also made portraits in crayon, pastel, water colors, and India ink.

In November 1881 Redington was commissioned by the Shreveport Daily Times of Shreveport, Louisiana to make photographs for a "mammoth illustrated edition" of the paper, to be printed in January 1882. He also solicited commercial work that would appear in the edition's advertising pages.

In 1882 Redington and his family arrived in San Francisco, California. He partnered with Hugo Weitz in the studio of "Redington & Weitz" at 34 Third Street. He separated from Louisa as he continued his cross-country travels on commission from the St Louis and San Francisco Railroad. In March 1884 he photographed a courthouse riot during the trial of William Berner and Joe Palmer for the murder of William Kirk in Cincinnati, Ohio.

By 1885 Redington had taken up with a 21-year-old woman whom he presented as his wife. They moved to Birmingham in late 1886 where he joined another photographer. The partnership of "Redington & Hill" opened at 1915½ 2nd Avenue North in January 1887.

By 1890 Redington was operating his own studio where he employed an assistant, Ralph Johnson. Johnson eloped with Redington's paramour in October of that year. Redington proceeded to secure a divorce from Louisa and exchanged vows with Ellie Porter on April 1, 1891. She also worked with him as a photographer's assistant at his "new" studio at 1914 2nd Avenue North. He remained at that address through 1894.

Redington died following a sudden stroke, on September 1, 1900. He was buried in the "Elks' Rest" section of Oak Hill Cemetery.