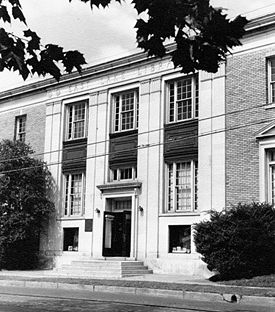 After East Lake residents made an appeal to the Birmingham Library Board, the branch library was organized and opened on February 12, 1914 in a 25-foot by 50-foot space on the second floor of the former East Lake City Hall. Local residents contributed furnishings and about 1,000 books to the new institution.

Land for the present library was purchased for $10,000 from Sidney King in 1926 and Miller & Martin, the architects of the new Birmingham Public Library in Linn Park were hired to design the building. Their two-story Georgian-Revival design provided 8,000 square feet of space and was clad in buff brick and limestone trim, complementing Birmingham Fire Station No. 19 next door.

The library benefitted from New Deal civic projects. Repairs and repainting were done under the Civil Works Administration in 1933 and 1934. The interior was enhanced with the installation of Carrie Hill's "Storybook Mural" in 1937. The 27-foot x 9-foot canvas was commissioned by the Public Works of Art Projects Division of the Public Works Administration. The PWA paid for Hill's time and work, while the library purchased the canvas and paints. Hill portrayed herself in the mural in the guise of "Mother Goose". A mid-1970s fire caused smoke and water damage to the mural. It was restored in 1993 by conservator John Bertalan.

In May 18-20 1972 the auditorium at the East Lake library hosted the first performances of the Birmingham Festival Theatre, founded that year by Victor Fichtner, Randy Marsh and Carl Stewart. The auditorium was later closed off and used for various municipal offices because it was accessible only by one stairway.

The East Lake Library was renovated in 1996 and 1997. The $450,000 project provided more public space on the ground floor, new staff areas, and an interior color scheme that drew from the colors in Hill's mural.

The library underwent another $999,000 renovation in 2009 and 2010. The project included new furnishings and equipment, including an elevator and emergency stair. The second floor auditorium was re-opened to the public with its original stage. Funding came in part from a $250,000 grant from the Alabama Public School and College Education Fund secured by Representative Oliver Robinson.