This article is about the founder of the Empire Coal Company, for his son, also sometimes called Frank Nelson Jr, see Frank Nelson III. 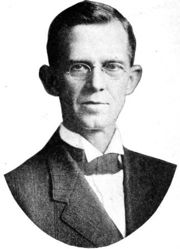 Frank Allen Nelson Jr (born February 17, 1865 in Shelby County; died 1928) was an industrialist and real estate developer, best known as the founder of the Empire Coal Company and for his involvement in the industrial development of North Birmingham.

Nelson, the son of Hardy and Sarah Elliot Nelson, was named for his uncle and styled himself a "Junior" in his memory. He grew up in Shelby County and worked in his father's store in Columbiana on Saturdays. He attended Oxford College and the University of Alabama before returning to Shelby County as a merchandiser and manufacturer of coal and lumber. He established a large-scale charcoal production business, supplying the Shelby Iron Works and a furnace in Rome, Georgia. He relocated that operation to Bibb County, where he supplied the Brierfield Furnace. At the same time he moved into banking in Anniston.

In 1905 Nelson bought a share of the Empire Coal Company, which proved to be one of the Birmingham District's most successful independent coal-mining operations. He served as president for ten years, but left and sold out his shares in 1915. Meanwhile in 1911 he organized the Bryan Coal Corporation. He also served as president of the Burnwell Coal Mining Company and the Samoset Coal Company.

In 1912 Nelson purchased a controlling interest in the Acme Laundry Company and oversaw construction of a new, modern plant. He was an organizer of the Traders National Bank and served on the boards of directors of several other major companies and as president of the Birmingham Chamber of Commerce in 1909. His support for Ethel Armes' The Story of Coal and Iron in Alabama led to its publication "under the auspices" of the Chamber of Commerce in 1910.