Highland's Bar and Grill is a noted fine restaurant located at 2011 11th Avenue South in the Spanish Stores in Five Points South. It is the flagship restaurant of nationally-renowned chef Frank Stitt, who also owns Bottega and Chez Fonfon. Highlands's menu, which is updated daily, features fresh, regionally-sourced ingredients prepared according to French haute cuisine methods.

Stitt opened Highlands on November 22, 1982. Esquire food critic John Mariani included the newcomer on his list of the Best New Restaurants in America, saying that Highlands had "coaxed" affluent suburbanites from their country clubs, "to come downtown and eat well for a change." Another early notice remarked on the "original artwork, pastel colors, and a tile and marble bar", but limited its description of the cuisine to "smoked salmon on pumpernickel or grilled cornish hen." 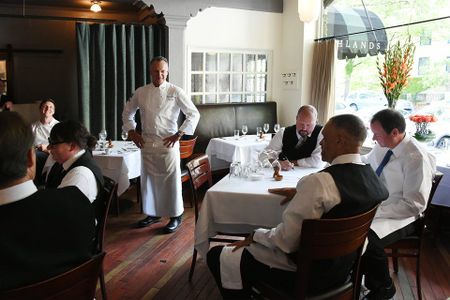 Stitt leading a staff meeting at Highlands in 2017. Photo by Joe Songer/Al.com

The restaurant has been credited with raising the profile of every segment of Birmingham's food culture; improving the range and quality of farm produce, elevating the standards of restaurant service, and educating the public to expect superior quality. Stitt-trained chefs have graduated to own a number of well-loved restaurants across the city, and his cookbooks have been local best-sellers. Stitt has assembled a staff of long-term employees who are often referred to as a "family". These include chef de cuisine Zack Redes, pastry chef Dolester Miles, dining room manager Ryan Ford, beverage director Matt Gilpin, sommelier Sean Meyer, bartender Chris Conner, and servers Goren "Red Dog" Avery, Patrick Noling and Clarence Young. Many former Highlands employees have gone on to spread Stitts' influence to another generation of acclaimed restaurants, including Clif and Maureen Holt, Chris Hastings, Chris Newsome, Brian Somershield, Mauricio Papapietro, and Feizal Valli.

For ten straight years, from 2009 through 2018, Highlands was named as one of five finalists for the James Beard Foundation's "Most Outstanding Restaurant" award, which it finally won on May 7, 2018. Stitt himself was named one of the best chefs in the Southeast by the Beard Foundation in 2001. Dolester Miles, who was nominated five times for the foundation's national award for "Most Outstanding Pastry Chef", also won the award in 2018.