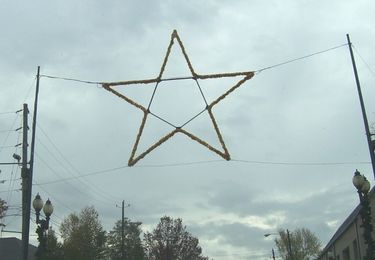 The Homewood Christmas Star is a large, 5-pointed star edged with gold tinsel and Christmas lights that is hung over 18th Street at the top of the hill of the Homewood Central Business District, just north of Oxmoor Road, each year during the December holiday season.

The 200-pound star was made by Douglass McConnell at his McConnell Sales and Engineering Corporation shop for Homewood's Christmas celebration sometime before 1951. Oscar Amos, owner of a paint and body shop, helped with the installation. The overall decoration of shopping areas in Homewood, Edgewood, Crestline and Mountain Brook Village were coordinated under the auspices of the Shades Valley Chamber of Commerce, chaired by Ted Carter.

The city's fleet maintenance department refurbished the star in the 1990s and since then the city has planned for an annual cleaning, repainting and redecorating. The star is decorated with a two-tone gold foil garland, 1,200 larger bulbs and ten strands of small twinkling lights.

The star was featured as the 2005 ornament in the Homewood historic Christmas ornament series. While usually hung without fanfare, on November 28, 2011, a rededication ceremony for the star was held which was attended by McConnell's son and grandson. Beginning in 2012 an annual "Lighting of the Star" event is held, sponsored by local businesses. O'Henry's Coffees roasted a special "Homewood Star Blend" for the 2012 ceremony.