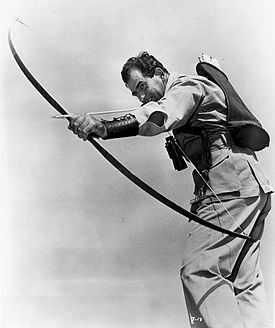 Howard Hill in a promotional photo for Tembo (1950)

Howard Hill (born November 13, 1899 in Wilsonville; died February 4, 1975 in Birmingham) was a professional archer, stunt performer and actor, best known for performing the trick shots in the 1938 film The Adventures of Robin Hood.

Hill played football, basketball and baseball at the Alabama Polytechnic Institute in Auburn between 1920 and 1923, but excelled at competitive archery. From 1926 to 1942 he won 196 consecutive field tournaments. He wrote the first set of rules for archery golf and won 7 national tournaments in that sport.

He was also an active bow hunter, taking more than 2,000 game animals (1,500 of which were rabbits) and 1,000 reptiles and fish in 12 countries. He was credited with weight records for the heaviest lynx, moose, javelina, mountain sheep, mountain goat and alligator ever killed by bow and arrow. He also developed a 41-inch long aluminum-shafted arrow which he shot from a 115 pound bow to kill a 10,000 pound bull elephant on February 27, 1950.

From the late 1930s to the early 50s Hill consulted on Hollywood films and often performed archery stunts or portrayed archers on film. He also produced and starred in his own series of documentary features about big game hunting. He is most remembered for the "splitting the arrow" shot he executed for The Adventures of Robin Hood. The shot has never been replicated with a wooden longbow and wood arrow, though others have performed similar feats with modern equipmant. Fellow stuntman Buster Wiles has claimed that the shot was rigged with a concealed guide-wire.

Hill and some friends founded Howard Hill Archery, a manufacturer of wooden longbows now located in Hamilton, Montana. He was inducted into the Alabama Sports Hall of Fame in 1971 and into the Bowhunters Hall of Fame. He died in 1975 and is buried at the New Ashville Cemetery in Ashville. His headstone is adorned with a bow and arrow motif.