This article is about the famed lyricist. For his father, the architect, see Hugh Martin Sr. 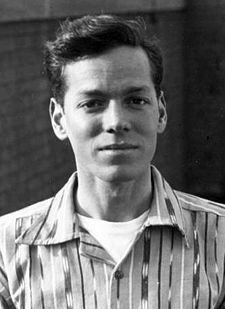 Hugh Martin Jr (born August 11, 1914 in Birmingham; died March 11, 2011 in Encinitas, California) was a theater and film composer and pianist, best remembered for his score for Meet Me In St Louis, which included "Have Yourself a Merry Little Christmas".

Martin was the son of architect Hugh Martin, partner in Miller, Martin & Lewis Architects. His mother was Ellie Robinson Martin, and he was born in her parents' house at 1900 14th Avenue South.

With his mother's encouragement, Martin began studying piano at the age of five, and he later attended the Birmingham Conservatory of Music and Birmingham-Southern College to train as a classical pianist. After hearing the music of Gershwin, though, he set his sights on popular song and moved to New York in the mid 1930s. Before long he found employment as an arranger and performer, helping score music for Cole Porter's DuBarry Was a Lady (1939), and Vernon Duke's Cabin in the Sky (1940) and singing in Hooray for What? in 1937. He formed a vocal quartet which he called "The Martins", one of whom was Ralph Blane, who, with Martin, arranged most of their songs.

The Martins appeared on radio programs and as a group in Irving Berlin's Louisiana Purchase (1940). A year later, Rodgers and Abbot chose Martin and Blane to create the songs for their musical Best Foot Forward, starring Nancy Walker.

Have Yourself a Merry Little Christmas

In 1943 Martin and Blane were hired by MGM to work in films as songwriters and vocal coaches. Their first assignment was to write three songs for the 1944 musical, Meet Me in St Louis, which featured Judy Garland singing, "The Boy Next Door," "The Trolley Song", and the now-classic "Have Yourself a Merry Little Christmas".

In the film, Judy Garland sings the latter song to her sister, expressing her feelings about the family being uprooted to New York. As first written, the song had a bitter tone, starting out "Have yourself a merry little Christmas/It may be your last/Next year we may all be living in the past..."

Garland requested that the lyrics be rewritten to alleviate some of the bitterness. The revised version, used in the film, went "Have yourself a merry little Christmas/Let your heart be light/From now on our troubles will be out of sight..."

Just before Meet Me in St Louis was released, Martin enlisted in the Army and was sent to Europe. When officers learned that he was the composer of the latest hit song, they transferred him into a music unit. His original company went on to suffer heavy casualties at the Battle of the Bulge.

In 1954, Frank Sinatra planned to record the song for his album A Jolly Christmas and asked for an even lighter version of the lyrics. Martin, visiting Birmingham at the time, worked through the problem while walking down Highland Avenue. It was while looking up at the trees there that he composed the last line, "Hang a shining star upon the highest bough," in place of "Until then, we'll have to muddle through somehow."

The American Society of Composers, Authors and Publishers ranks "Have Yourself a Merry Little Christmas" as the 6th most recorded holiday song of all time.

Martin worked on the songs for Meet Me in St Louis while he was living in a cottage built by his father on 15th Avenue South in Five Points South.

Martin and Blane were twice nominated for the Academy Award for Best Song, for "The Trolley Song" in 1944, and, along with Roger Edens, for "Pass the Peace Pipe" from Good News. In 1956 the writing duo recorded an album of their own songs, "Martin and Blane Sing Martin and Blane" with the Ralph Burns Orchestra.

After "Meet Me in St Louis" Martin became a close friend of Garland's and accompanied her at many of her concert performances in the 1950's including her legendary stint at the Palace. He also accompanied Eddie Fisher at the Palladium.

In 1964 Martin teamed with Timothy Gray to produce the hit musical High Spirits based on Noel Coward's Blithe Spirits. He served as music director for the 1979 hit Sugar Babies with Mickey Rooney.

In 1960, Martin suffered a nervous breakdown and turned to his faith for support. 14 years later he was in the hospital again, sharing a room with a Seventh Day Adventist. He joined the Adventist Church and discovered gospel singer Del Delker on the Adventist radio ministry "Voice of Prophecy". He set out for Newbury Park, California with the idea of becoming her accompanist.

By chance, she soon needed a new accompanist and Martin got his wish. He spent much of the 1980's with Delker on revival tours, eventually becoming part of the speaking program as well. In 1975 he met Elaine Harrison, a fellow church member, who became a lifetime friend and confidante. In 2001 he rewrote his most famous song one more time (with the assistance of John Fricke) as a more specifically religious number, "Have Yourself A Blessed Little Christmas" which was recorded that year by Delker with Martin on piano.

Martin remained involved with the world of musical theater through the early 21st century. He re-arranged music for the stage version of "Meet Me in St Louis" in 1989 and collaborated with vocalist Michael Feinstein for a 1995 CD "Michael Feinstein Sings the Hugh Martin Songbook", an album on which the then 80-year-old songwriter accompied Feinstein on piano and sang a duet. In 2004 he composed a new opening number for "Best Foot Forward"'s revival by the York Theatre in New York.

Hugh Martin was inducted into the Songwriters Hall of Fame in 1983 and into the Alabama Music Hall of Fame in 2001. He resided at the home of Fred and Elaine Harrison in Encinitas, California. He spent seventeen years working on a memoir, Hugh Martin: The Boy Next Door, which was published in 2010. Martin died in March 2011.