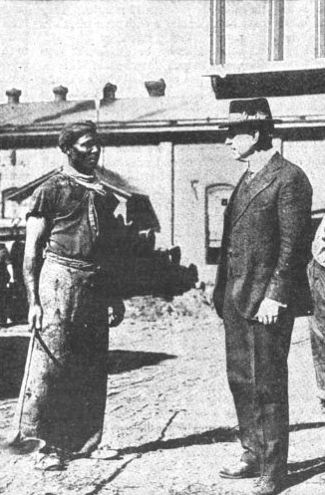 McWane with an unnamed worker at ACIPCO in the late 1910s

McWane was the son of Charles Phillip and Eliza Hogue Dudley McWane of Wytheville. His father began operating a foundry in 1871 and James, like his brothers, grew up in the business. James came to Birmingham in 1903 to take over the Birmingham Steel and Iron Company. There he supervised the casting of Giuseppe Moretti's "Vulcan" for the 1904 Louisiana Purchase Exposition in St Louis, Missouri.

In 1908 McWane was recruited to work as a vice-president at John Eagan's ACIPCO north of Birmingham. He took over as president of the company in 1915 in the midst of a great number of improvements to the firm's employee welfare programs. His primary interest, however, was in improving product quality and manufacturing efficiency. He introduced an electric furnace to ACIPCO, pioneered the production of 16-foot rather than 12-foot sections, and invented a new method of drying casting cores that allowed the foundry to add a night shift. He also oversaw the expansion of ACIPCO's operations, including the acquisition of Beggs Pipe Foundry in 1919. In 1921 McWane was forced out in a dispute with Eagan, who resumed day-to-day control of American Cast Iron Pipe.

McWane responded by opening his own competing pipe foundry in Birmingham. He quickly expanded with the founding of the Pacific States Cast Iron Pipe Company in Provo, Utah in 1926. He built a large stone house on Stratford Road in Mountain Brook in 1929.

McWane died in 1933 and passed the company to his son, Bill. He is buried at Elmwood Cemetery. McWane was inducted into the Birmingham Business Hall of Fame in 2013.