Childers was the son of Hayden Prior and Patti Undine Childers of Norwood. He attended public schools and served in World War I. In 1915 he earned a fellowship from the Danforth Foundation to attend Oberlin College in Oberlin, Ohio. He left school to serve as a US Navy pilot in World War I, then returned and completed his bachelor's degree in 1920. He taught in Birmingham for a year before going to Oxford University on a Rhodes Scholarship to study history and literature. He completed a second bachelor's degree and a master's there.

In 1925 Childers returned to Birmingham as a professor of literature and creative writing at Birmingham-Southern College. He published his first novel, Laurel and Straw (about an American Rhodes Scholar at Oxford) in 1927 and his second, Hilltop in the Rain (set in a small Southern college) in 1928. His best-known work, A Novel About a White Man and a Black Man in the Deep South, an argument in favor of racial integration, was published in 1936. 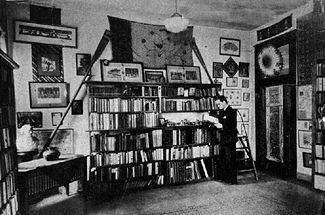 James Saxon Childers in his study at Birmingham-Southern

Childers also became recognized for his travel writing. He published several widely-read "studies" of adventures in Asia, Africa and South America during the 1930s, while also moonlighting as a reporter, columnist and book reviewer for the Birmingham News. Friends and colleagues of Erskine Ramsay convinced Childers to tackle a biography of the well-known industrialist and philanthropist, which was published in 1942.

1942 was a momentous year for Childers. He left Birmingham-Southern, married Maurine White, and returned to military service as an Air Force intelligence officer in World War II. His next group of novels concerned the adventures of an army aviator and intelligence officer. After the war he and his wife settled in Chapel Hill, North Carolina.

In 1951 Childers and his wife moved to Atlanta where he joined the staff of the Atlanta Journal. He was forced to resign in 1956 over a conflict with the publisher regarding his progressive views on race relations. He was hired to lecture on American culture in Asia by the United States Department of State and founded the publishing company of Tupper and Love, Inc. in Atlanta.

Childers died of cancer in 1965 and is buried at Elmwood Cemetery. His papers are archived at the Birmingham Public Library Archives and at the Southern Historical Collection at the University of North Carolina.