This article is about the State Representative. For others with the same name, see John Rogers (disambiguation). 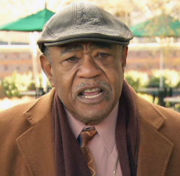 John W. Rogers Jr (born December 16, 1940 in Birmingham) represents House District 52 in the Alabama House of Representatives. He is also the director of Rogers & Rogers Inc., which provides photography and public relations services, and is Director of Minority Affairs for UAB.

Rogers earned his bachelor of science at Tennessee State University and a master of science from the University of Alabama. He also has an associates degree in vocational education from UAB.

Rogers was first elected to the House of Representatives in 1982 and has been re-elected six times. He currently sits on the committee for boards and commission, and for education appropriations. As a member of the Jefferson County Legislative Delegation he has been an outspoken supporter of a domed stadium for Birmingham and a proponent of removing UAB from the control of the University of Alabama Board of Trustees.

Rogers sponsored the legislation creating the Birmingham Racing Commission in 1984, that paved the way for construction of the Birmingham Turf Club and the return of live horse racing to Alabama. The road leading to the facility was named John Rogers Drive in his honor.

In 1990, Rogers, and fellow Representatives Pat Davis and Jim Wright, were charged with using their elected offices to extort more than $30,000 from mineworkers union officials in return for support of a coal bill then in the Legislature. Davis was convicted while Rogers and Wright were acquitted.

Rogers serves on the boards of the 4th Avenue YMCA, the Birmingham Convention and Visitors Bureau, the St Andrew's Foundation, and the Sickle Cell Foundation. He is a member of the National Conference of Christians and Jews and the Boy Scouts of America.

In the May 2009 sentencing hearing of Samuel Pettagrue, then-Assistant U.S. Attorney William C. Athanas strongly implied in open court that Rogers was involved in the fraud for which Pettagrue and E. B. McClain had been convicted, but that Rogers was not indicted because his part of the scheme occurred in 2001 and the statute of limitations had run out.

In March 2010 UAB complied with a request to turn over documents and computer hard drives from Rogers' office to the FBI. The investigation did not produce criminal charges.

Rogers and his wife, Jennie, have three children; Jerena, Tammy and John III. He is a member of St Mary's Catholic Church.

In debate over Alabama's 2019 Alabama abortion bill, which would make it a felony to perform or attempt to perform an abortion in the state for any reason other than to save the life of the mother, Rogers' hyperbole was condemned by conservative pundits as evidence of "extremism" from Democrats. The controversy caused a rift between Rogers and Senator Doug Jones and led to Rogers hinting at a possible primary challenge.