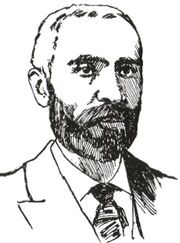 Leon Landsberg (born February 1853; died March 9, 1930 in Bronx, New York) was a newspaper correspondent and editor, and a German instructor in Birmingham City Schools. He later worked as an art critic, and department editor for the New York Tribune, and as a translator. In the 1890s he pursued spiritualism and became a devotee of the yogi Swami Vivekananda, adopting the name Swami Kripananda.

Landsberg was educated at Leipzig before immigrating to the United States in 1887. He spent a year or so teaching at Woolwine High School in Nashville, Tennessee before arriving in Birmingham. He was invited to teach German language classes in the city's public schools, and to serve as local editor for a Birmingham edition of W. B. Fischer's Nashville-based Anzeiger des Südens newspaper, which he operated from an office above Seals Bros. piano and organ showroom at 2113 2nd Avenue North.

In March 1888 German Club president Emil Lesser and Landsberg refused to support a resolution by the club praising Kaiser Wilhelm on the occasion of his death, on the grounds that he had been an enemy of the German Socialists. Lesser resigned his position when the resolutions were passed. Soon later a member of the club accused Lesser and Landsberg of being anarchists. The Birmingham Board of Education met to consider asking for his resignation from teaching. It was later speculated that he may have been able to keep his teaching position, if not for also being in the habit of frequenting saloons.

Landsberg endorsed the successful candidacy of John T. Milner for Alabama State Senate in the 1888 general election. Explaining his willingness to support a Democrat despite his well-established advocacy for labor causes, Landsberg highlighted Milner's position in opposition to convict labor, and stated that, "I always support the best man regardless of party...I am satisfied that in this instance the interest of the community at large, and of the labor element in particular, will be best served by the election of John T. Milner to the state senate."

In April 1889 Landsberg attended the trial of Richard Hawes for the murder of his wife and two daughters. As early as August of that year Landsberg began taking an interest in spiritualism. It was reported that he had "induced a woman to submit," to being injected with the Brown-Séquard "life elixir," possibly resulting mostly in painful side-effects. In 1890 Landsberg and John Connelly published a translation from French of a spurious account of Jesus purported travels in India, as recounted by Nicolas Notovitch.

In February 1891 F. Schranck, editor of the Birmingham Deutscher Zeitung, accused Landsberg of intercepting and opening letters to his paper. Landsberg was found not guilty at trial before U.S. Commissioner William Hunter. In May 1891 a warrant for Landsberg's arrest was issued alleging his participation in a fraudulent scheme involving foreign bonds which was operated from New York by E. H. Horner & Co.

Kripinanda split from Vivekananda and from the New York Vedanta Society in 1898, and appeared to ridicule his former practice in print.

In the early 1900s, Landsberg was still working as a department editor for the Tribune, and resided near Union Square in New York City. He taught German in New York City schools during World War I. By 1920 he had resumed using the name Swami Kripinanda and published regular columns on yoga practices in the New York World.