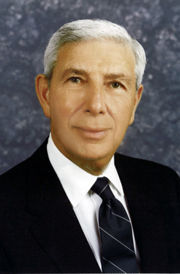 Engel, the son of William P. and Bess Engel, grew up in Birmingham and attended Lakeview Grammar School and Ramsay High School. He attended the Wharton School of the University of Pennsylvania and served in the U. S. Army during World War II. He was discharged as a 1st Sergeant in the Signal Corps in 1945 and joined his father's Engel Insurance Co.. He married the former Ruth Salomon of Milwaukee, Wisconsin on February 23, 1948.

As Engel rose in business, the company expanded into real estate and mortgages. After his father's death in 1973, Engel sold off the mortgage and insurance divisions to focus on real estate. He helped redevelop the Bank for Savings Building, where the company's offices were located. Engel retired as head of Engel Realty Company in 1986.

In retirement he gave generously of his time and wealth, serving the Alabama Symphonic Association, Birmingham Museum of Art, EyeSight Foundation of Alabama, Leadership Birmingham, Birmingham Zoo, Birmingham Jewish Federation, St Vincent's Foundation and Alabama Shakespeare Festival. He served as president of Temple Emanu-El in 1964–66. He and his wife, Ruth made many gifts to the Community Foundation of Greater Birmingham, including a $1.4 million unrestricted bequest. They also made a large bequest to help establish the Abroms-Engel Institute for the Visual Arts at UAB.

Engel was inducted into the Alabama Academy of Honor in 2001 and the Birmingham Business Hall of Fame in 2011. UAB granted him an honorary Doctorate of Humanities in 2010. Engel died in 2013. He was survived by his wife, Ruth; two children, Barbara and Bill; and three grandchildren.