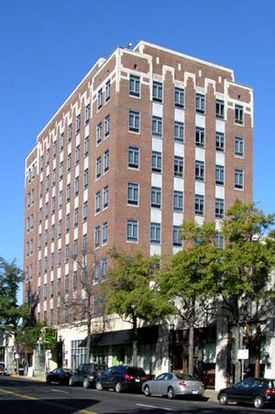 As the Hotel Highland in January 2009.

The Medical Arts Building or Medical Arts Tower is an 8-story building built at 1023 20th Street South in 1931 as medical offices. It was developed by the Kamram Grotto, a fraternal order made up of Freemasons who also built the nearby Pickwick Club in the same year. The architect was Charles H. McCauley, who studied similar developments in Atlanta, Chattanooga, Nashville and St Louis before completing the design. Construction was completed in just six months.

The brick-clad building has stone and terra-cotta ornaments as well as cast aluminum spandrels below the windows. The art-deco styling carries over into the elevator lobby where a star motif symbolizes the building's location at Five Points South. Originally the ground floor was occupied by an apothecary and other shops.

In the 1980s the building was converted into the Pickwick Hotel by developer Donald Kahn. Kidd/Plosser/Sprague designed the renovations which were carried out by Brasfield & Gorrie. Kahn also redeveloped the area behind the hotel into a retail and restaurant district called Pickwick Place, constructing a four-story parking deck to serve both. In 2007 the hotel was fully renovated by Long & Cox Properties, which renamed it the Hotel Highland.