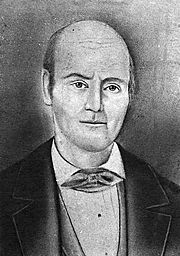 Ninian Tannehill (born 1796 in Abbeville, South Carolina; died October 10, 1875) was a farmer and owner of the Roupes Valley Ironworks that later bore his name.

Tannehill was the son of James and Catherine Hill Tannehill. He served in the Ohio Militia during the War of 1812. He settled in Roupes Valley in 1818 and married Mary "Polly" Prude on January 28, 1820 in a log house at Elyton. They had four children: Mary Lavinia, Marion, David Milton, and John H. Thurmon.

Tannehill operated several ventures on his plantation, including a cotton gin, a sawmill, a grist mill, and the iron foundry built by Daniel Hillman, which he bought in 1836. He served as a Justice of the Peace in Jefferson and Tuscaloosa County and was a trustee of local schools.

Tannehill expanded the furnaces, hiring Moses Stroup in 1855 to oversee construction and operation. He sold the enterprise to John Alexander in 1857 and returned to farming and other businesses. Tannehill lost his son, David, and a grandson, as well as his home and mills in the Civil War.

Tannehill died in 1875 and is buried in the Bucksville Cemetery in Bucksville.