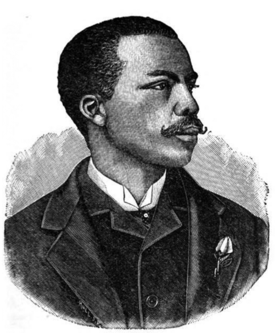 Benjamin was enrolled at public school on Saint Kitts and continued to study with a private tutor in England. He was enrolled at Trinity College, Oxford for three years before leaving the university to voyage to the East Indies. After two years he returned to England, then soon set sail for the United States, arriving April 13, 1869 in New York. After ten days he found a berth as cabin boy on the Lepanto, sailing to Venezuela, Guayana and the West Indies. When he returned to New York in the Fall, he decided to remain.

Benjamin was immediately active in public affairs and befriended abolitionist Henry Highland Garnet. He was employed by Joe Howard, Jr of the New York Star as a solicitor. There he became acquainted with Progressive American editor John J. Freeman and joined that publication as city editor. After leaving that paper in 1876, he campaigned in New York on behalf of Republican candidate for President, Rutherford B. Hayes. He was awarded for his efforts with a post as a letter carrier, but left that job after a few months to accept a teaching position in Kentucky.

Benjamin began to read law with a set of books borrowed from former Representative William B. Read in Hodgenville and with the help of then county attorney Dave Smith. He continued to study while serving as an assistant to W. H. Mixon, principal of a high school in Decatur, Alabama. After that he moved to Arkansas, and then to Memphis, where he completed his law study under Josiah Patterson and was admitted to the bar in January 1880.

While in Memphis, Benjamin also delivered occasional sermons. He was described by local schoolteacher Ida B. Wells after one such sermon as, "a very slender, puerile-looking, small specimen of humanity." Later, as corresponding editor for the Nashville-based Free Lance, he adopted the pen name "Cicero" for some of his editorial contributions. He participated in an Afro-American convention in Chattanooga, Tennessee which resulted in a resolution to petition the U. S. Congress to pledge $1 billion "to colonize the colored race in some other country." He also practiced as an attorney intermittently at different stops in his career, and famously won acquittal for a black woman accused of murder in Richmond, Virginia in 1884.

Benjamin's primary activity was the establishment of a series of newspapers across the country, including The Colored Citizen in Pittsburgh, Pennsylvania and The Chronicle in Evansville, Indiana before he arrived in Birmingham and launched the Negro American in September 1886.

At every stop Benjamin's editorial voice was focused on promoting equal rights for African Americans, following his motto: "My race first and my best friends next." The Negro American was, he proclaimed, "Devoted to the Moral, Intellectual, Industrial and Political Interests of the People." He commented that since blacks made up more than a third of the population of Birmingham, that they should be represented in the city government. He also preached in the African Methodist Episcopal Zion Church and led a Sunday School. He reported pleasure with the improved literacy rate in the school as making it possible to devote more lessons to scripture rather than to the alphabet.

Benjamin described himself as a "chronic disturber of the public peace". His courage in writing about controversial issues exceeded even his peers, and included editorials calling on blacks to arm and defend themselves against lynchings and racial violence that accompanied gains in African American political power during Reconstruction.

Benjamin's outspokenness proved unwelcome in Birmingham. In Spring 1887 he wrote an editorial defending Montgomery Baptist Leader publisher Jesse C. Duke. Duke had mused about, "the growing appreciation of the white Juliet for the colored Romeo," following the lynching of an African American man accused of rape and was forced to flee the state, chased by a mob. In May Benjamin attended a two-day meeting in Selma at which the Alabama Colored Press Association was organized. He was forced to leave Birmingham later that Summer. Benjamin had also served as a secretary for the Colored National Bar Association and Grand Master of the United Brothers of Friendship.

Benjamin moved to the west coast and was hired as local editor for the white-owned Los Angeles, California Daily Sun in 1888. After two years he moved north to San Francisco and founded the California Sentinel there. In California he was elected presiding elder of the state's conference of the African Methodist Episcopal Church. President Benjamin Harrison offered Benjamin a consulate post in Haiti, but he declined in order to continue publishing the Sentinel.

In 1892 he married the former Lula M. Robinson and had two children, a son and daughter. He brought his family to Lexington, Kentucky in 1897 and quickly involved himself in political issues there. In October 1900 he got into an argument Michael Moynahan, a Democratic precinct worker whom Benjamin accused of harassing African American registrants. Afterward Moynahan shot Benjamin in the back, killing him. The presiding judge at the examination accepted Moynahan's claim of self-defense and declined to pursue criminal charges.