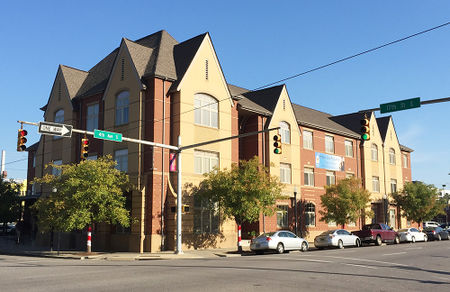 The Birmingham Ronald McDonald house was the fifth of over 350 such facilities now in operation worldwide. The initiative to open a house here came from Children's Hospital public relations director Marianne Sharbel. She approached McDonald's franchise owner/operator Max Cooper, who provided the financial foundation for the project. The facility opened on May 30, 1979 at 920 17th Street South and incorporated two buildings built in the 1920s and 1950s. It was expanded to 32 bedrooms and upgraded in 1991, but remained too small, too distant, and too costly to maintain to adequately support the facility's mission. A formal facility evaluation in 2003 confirmed those findings.

Later the RMHCA announced plans to construct a new, larger facility at the corner of 4th Avenue South and 17th Street, closer to Children's Hospital and UAB Hospital. A $400,000 challenge grant from the Kresge Foundation helped kick-start a fund-raising campaign led by Alan Lott and Todd Sharley. Honorary co-chairs of the campaign were AmSouth Bank CEO Dowd Ritter and his wife Susan. The Birmingham-area premiere of the 2003 film Big Fish was held on December 13 at the Summit 16 Cinema as a fund-raiser for the Ronald McDonald House.

The new $7 million building, which opened in 2007, encloses 33,000 square feet in which are arranged 41 guest rooms, many with private baths and kitchens as well as community rooms and play areas. The new building is more accessible to disabled guests and has more space for administrative, meeting, storage and dining areas. The building was designed by Williams Blackstock Architects and construction was led by Brasfield & Gorrie.

Families hosted by Ronald McDonald House must live outside Jefferson County and must be referred to the program by a hospital social worker. The program is offered free of charge, but many guests made donations of $5 to $10 per night. The charity organizes free visits to participating area attractions including the Birmingham Zoo, Birmingham Children's Theatre, McWane Science Center, Birmingham Barons and Vulcan Park. Volunteers provide home-cooked dinners and help stock the house with pantry staples, snacks, toiletries and toys. Since opening, the house has served more than 57,000 families.

On March 3, 2017 ground was broken for a 28,543-square foot addition to the facility, also designed by Williams-Blackstock and built by Brasfield & Gorrie. The three-story wing added 28 short-term guest suites and five extended stay apartments, along with family living rooms, laundry rooms, and renovations to the existing building to create a new family center, volunteer kitchen, game room and two more family living rooms. The new areas opened on January 11, 2018.