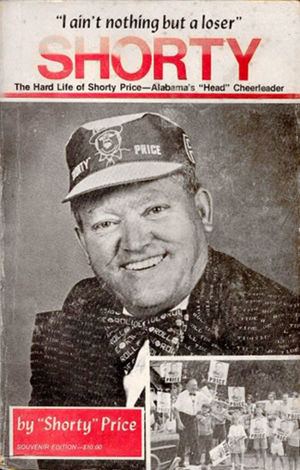 Price, who earned his nickname for his 5-foot stature, graduated from Louisville High School in 1940 and attended the University of Alabama. As an undergraduate he briefly roomed with future Governor George Wallace.

While at the Alabama School of Law he was elected a cheerleader for the school. He continued to lead cheers from the stands over the next three decades, dressed in crimson and white, often drunk, and smoking Tampa Nuggets. In 1979 he was charged with public drunkenness and disorderly conduct after exposing his rear end to the Tennessee marching band. He was fined $125 by Judge William Cole, who told him "See you next year."

After losing a race for state legislature in 1950, Price was elected as an alternate delegate to the 1952 Democratic National Convention. In the 1954 election he garnered 100,000 votes for Lieutenant Governor. He ran for numerous other offices throughout his life, including the 1958, 1970, 1974 and 1978 gubernatorial primaries and the 1976 presidential election. When Lurleen Wallace ran for Governor in 1966, Price placed his wife, Delores, on the ballot to oppose her.

Though he campaigned across the state, with the slogans, "Shorty, Shorty, he’s our man. George Wallace belongs in the garbage can", and "Honest government is worth the price, and the right price is Shorty Price," he never again earned more than 2 percent of the vote. In 1972 Price proposed to shorten the Governor's term from four to two years, reportedly so he could run more often.

Price published an autobiography in 1980, turning a boast made by Crimson Tide coach Bear Bryant on its head for the title, I Ain't Nothing But a Loser.

Price died which his car ran off the road and slammed into a bridge on I-65, nine miles South of Montgomery on Saturday November 1, 1980. He was on the way to Jackson, Mississippi for an Alabama game against Mississippi State. The Crimson Tide lost to the Bulldogs 6-3 that afternoon, ending a winning streak that dated back to September 1978. Price was buried in his home town of Louisville the following Tuesday, which was election day.

Price was survived by his wife and three sons.