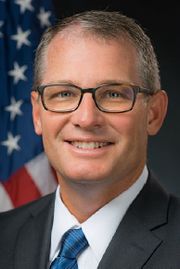 Onis "Trey" Glenn III (born c. 1972 in Wetumpka, Elmore County) is a consultant and lobbyist who served as director of the Alabama Department of Environmental Management from 2005 to 2009 and as the Southeast Region (Region 4) administrator for the U.S. Environmental Protection Agency from August 2017 to November 2018.

Glenn is the son of Onis Glenn Jr and real estate agent and former Wetumpka mayor Jo Glenn. He completed his bachelor's degree in civil engineering at Auburn University in 1994 and began working as a hydrologic engineer for Southern Company's Reservoir Management and Environmental Affairs group. He completed a master's in business administration at UAB in 1999. In 2001 he was appointed division director for the Alabama Office of Water Resources, a division of the Alabama Department of Economic and Community Affairs (ADECA).

In February 2005 Glenn was appointed director of the Alabama Department of Environmental Management (ADEM) by the Alabama Environmental Management Commission. Bill Johnson, head of ADECA, filed a complaint with the Alabama Ethics Commission alleging that Glenn had violated state law in accepting travel gifts and in seeking his appointment to ADEM. In his previous position at the Office of Water Resources Glenn had traveled at the expense of and approved contracts with Malcolm Pirnie, where AEMC chair Scott Phillips was a director. In April 2007 the Ethics Commission found probable cause to refer the matter to Montgomery County District Attorney Ellen Brooks for possible prosecution. She presented the case to a grand jury in January 2009. The grand jury found "no provable violations," of state law.

Meanwhile, Glenn's penchant for accepting gifts from companies his agency was in charge of regulating, such as invitations to Alabama Power's corporate suite at the Montgomery Riverwalk Stadium, led former ADEM general counsel David Ludder to urge the AEMC to adopt a rule barring ADEM staff from accepting any gifts from regulated parties.

During his tenure at ADEM, Glenn touted his role in the passage of the state's Solid Waste and Recycling Act, the agency's efforts to clean up illegal dump sites, and his leadership in streamlining the department and putting more resources online. Environmental advocacy groups in Alabama reported a "dramatic drop in enforcement actions" taken by ADEM under Glenn's leadership.

Glenn resigned from ADEM in 2009 and began working as a consultant and lobbyist with Blue Ridge Consulting, working on contracts for the Business Council of Alabama, Strada Professional Services and A. G. Gaston Construction. In 2013 he registered as a lobbyist for the Business Council of Alabama. In 2016 he also took on the role of Director of Client Development for Strada.

President Donald Trump appointed Glenn to his current role at the EPA in August 2017. In his financial disclosures to the United States, which he revised four times, Glenn listed consulting income of more than $5,000 each from Blue Ridge, Strada, the Birmingham Jefferson County Transit Authority, the City of Birmingham, Balch & Bingham, Big Sky Environmental, MAP Development, Matrix LLC, the City of Bessemer, Maynard Cooper & Gale, the Business Council of Alabama, Blue Ridge Partners, Black Mesa Energy and Conservatives with Courage. Blue Ridge Consulting paid a salary to Glenn's wife, Alison, and she was also paid out promissory notes from Blue Ridge and Strada in 2018 that each exceeded $100,000. He did not report any transactions or gifts.

Glenn was a consultant to Balch & Bingham for consulting work on their "Drummond/ABC Coke project", a campaign to prevent the listing of the 35th Avenue Superfund Site on the EPA's "National Priorities List", which could expose Drummond and other "potentially responsible parties" to compensate the EPA for cleanup costs. Glenn was called to testify in the criminal trial of Joel Gilbert and Steven McKinney, attorneys at Balch & Bingham, and David Roberson, an executive with Drummond Company, who were charged with bribing Alabama State Representative Oliver Robinson to testify falsely before ADEM and the EPA and to use his office to advance Drummond's interest in opposition to the public. In emails submitted as evidence Glenn discussed his efforts on behalf of Drummond to edit letters that Robinson would sign, to introduce Robinson to regulators, and to convince his successor at ADEM, Lance LeFleur, to support Drummond's position against the EPA. GASP, an advocacy group involved in publicizing the history of industrial pollution in North Birmingham, has called for Glenn to recuse himself from any matters relating to the EPA's enforcement actions at that site.

In November 2018 Glenn was indicted on charges of conspiracy with AEMC chair Scott Phillips to violate the Alabama Ethics Act. He resigned from the EPA on Sunday, November 18.