From Bhamwiki
(Redirected from What's on 2nd)
Jump to: navigation, search 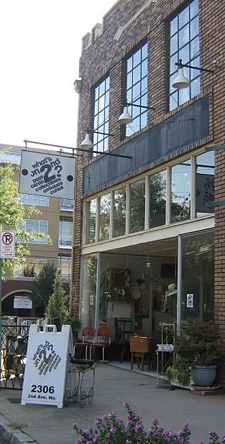 What's on 2nd? is a store specializing in antiques, art, and collectibles located at 1101 20th Street South in the Spanish Stores building

Gilmer fills the windows with seasonal displays, including a science-fiction theme during the OmegaCon and a political theme during the election season. The store also served as a venue for fundraisers and art shows, and as an artist site during the Artwalk festival when it was located in the Loft District.

In April 2016 What's on 2nd? downsized and moved to a smaller location at 2323 1st Avenue North in the Wooster Lofts building (the former Calder warehouse). After four years there, Gilmer's lease expired and he moved the store to its present 1,729 square-foot location.