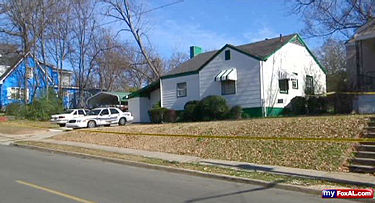 The home at 3113 Avenue S Ensley where the crime occurred

The 2012 Ensley Highlands murders were five homicides committed by alleged robbers who broke in on a card game at a house at 3113 Avenue S in Ensley Highlands (map) on the morning of Sunday, January 29, 2012.

The Birmingham Police Department responded to neighbors' reports of a robbery in progress around 3:30 AM. They found five victims in the house, four of whom had been shot in the back of the head at point-blank range. The victims were identified two days later as friends and relatives who regularly got together to play cards.

Three suspects were charged with five counts each of capital murder. Police chief A. C. Roper believes that the principal perpetrators have all been arrested and charged, but investigation continues into the possible involvement of others. Though no details have been provided, police have said that at least one of the suspects was known to at least one of the victims, and that the primary motive was robbery.

Interviews with neighborhood residents revealed that the robbery had been interrupted in progress, and that at least two people may have escaped unharmed. On Sunday evening, police, with help from U. S. Marshals, arrested three individuals in Dolomite in connection with the investigation.

None of the three were formally charged at that point, but were booked with an indication that capital murder charges would be filed. One of the three, a 24-year-old, had recently pleaded guilty to carrying a concealed weapon and was also under indictment for attempted murder and assault in another county. He was released the next day with no charge. His younger brother, Markell Devante Bell, 18, was charged with robbery in an unrelated incident. The two of them had been involved in an automobile collision on Sunday afternoon in Fairfield that claimed the life of Alona Rebecca Farries. They were passengers in an SUV driven by Shakela Johnson of Hueytown.

The other suspect, Rashad Stoves, 17, a Wenonah High School student, was convicted on five counts of felony murder and one count of reckless manslaughter. Alan Baty was the prosecutor assigned to the case. Judge Stephen Wallace appointed attorneys Ralph Sheffield and Kira Fonteneau to represent Stoves. He was convicted in November 2014 and sentenced in March 2015 to serve six concurrent life sentences, with the possibility of parole.

On February 1, police announced the arrest of Artavius Underwood, 16. He was also charged with five counts of murder and in a separate robbery. He pleaded guilty in 2014 and was given a life sentence.

On February 2 a third suspect, Reginald Mims, 16, of Bessemer, was also charged with 5 counts of capital murder. He pleaded guilty to six counts of felony murder in return for a 25-year sentence.

A community candlelight vigil brought about 75 people to the area where the crime occurred on the evening of February 1. Family members of the victims as well as neighbors, community activists, and Birmingham City Councilman Steven Hoyt attended.

On February 9 Bishop Calvin Woods held a press conference outside the house, calling on fathers to provide for, protect, and minister to their children.