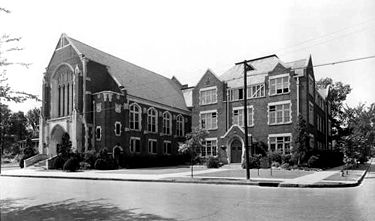 The church was founded in 1886 as the First Methodist Episcopal Church, South of Avondale, after two years of meeting for Sunday school in an area store building. Encouraged by John Ferguson, the church organized itself with 18 members and began holding meetings at a residence on Avenue C. Within a year the group erected its first building on a lot donated by Benjamin Roden, president of the Avondale Land Company at 4212 5th Avenue South. The white-washed church house cost $3,000 and featured a bell donated by William Drennen. Soon later a parsonage was built behind the church, facing 4th Avenue South.

At the turn of the century the small church was outgrowing its house of worship. Sunday school classes met at Griffin's Hall and the Avondale Fire Station. In 1917 the present property was acquired from George Hays. A Sunday school building was the first structure erected on the site, commenced in 1922 and completed in 1925. A campaign to raise funds for a new sanctuary was begun on Easter Sunday 1927. It was completed in 1931. Both the Sunday school and sanctuary were designed by the Birmingham firm of Miller and Martin.

A Family Recreation Center facing 5th Avenue behind the education building was added in 1973.