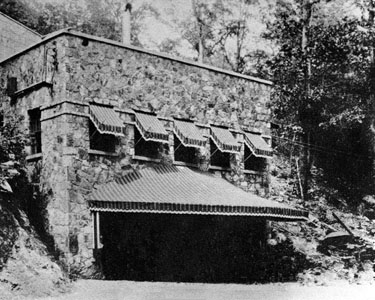 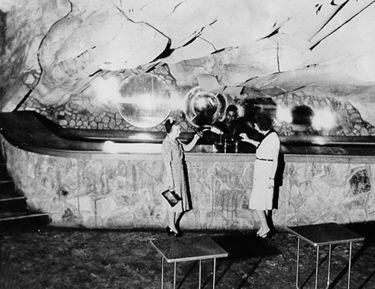 The bar at Bangor Cave Club in the 1930s

Bangor Cave is a limestone cavern near Bangor in Blount County, notable for having housed a popular casino and nightclub which operated there in the late 1930s.

The cavern consists of seven main chambers carved through a thick bed of Bangor limestone by the action of water, possibly enlarged by the settling of the cavern floor, which overlies a clay bed. The largest chamber is about 350 feet long, 57 feet wide, and 20 feet tall. The deepest part of the cave is about 1,151 feet below grade and it has two natural entrances.

The cavern was first described by state geologist Walter Jones in the late 19th century. It became an attraction in the resort area of Blount Springs, with visitors exploring by torch and candle-light. The main chamber hosted occasional band concerts. A spur of the Louisville & Nashville Railroad from Bangor Depot brought visitors virtually to the cave entrance. The area's heyday as a resort ended with the closing of the Blount Springs Hotel in 1914.

In the 1930s, property owner J. Breck Musgrove led a group of investors that spent $70,000 transforming the cavern into a nightclub. They blasted a new entrance and constructed a bandstand and bar from the rubble. The floor was leveled with poured concrete and topped with red and green linoleum. The stalactites and niches were highlighted with colored lights and artificial plants were brought in to soften the decor. A second chamber was furnished as a ladies' lounge, and a third was secured behind an iron door and outfitted with slot machines and gaming tables. The bar had a mirrored back and had a space for a jar full of $1000 bills. Tutwiler Hotel veteran George Bender was hired on to manage the dining room, which served a fixed-price dinner for $1.10. Confidence man Joseph "The Yellow Kid" Weil found employment as a cashier.

The club soon attracted the attention of law enforcement, with Governor Bibb Graves ordering Blount County Sheriff Ed Miller to close it down. There were numerous raids and seizures before authorities succeeded in discouraging the investors. The Bangor Cave Club closed for good in January 1939. What remained of the contents was damaged by a fire in 1940.

In 2002 the Alabama Land and Timber Company closed the property to cavers. An exhibit about the cave's history is displayed at the Blount County Memorial Museum on Courthouse Square in Oneonta.