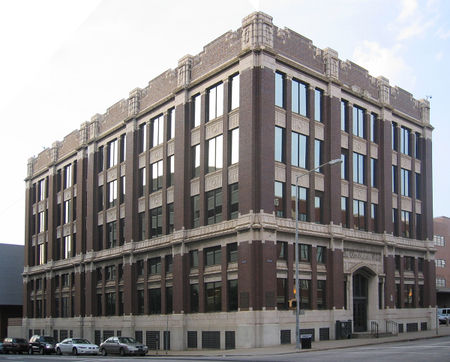 The 1917 Birmingham News building was constructed on the northeast corner of 22nd Street and 4th Avenue North for the growing operations of the Birmingham News at the direction of president, Victor H. Hanson.

Warren and Knight's design for the stolid, 6-story brown brick and limestone building was executed in the Jacobethan style. Features typical of the style include contrasting trim, a stepped parepet, and a shallow gothic archway framing the heavy oak entrance doors.

The paper moved its operations into their new home during the first week of September, delaying an open house until some weeks later when back-ordered furniture could be uncrated and all staffers could move into their desks. The first edition to be printed from the new plant was dated September 4, 1917. Describing the new building, the paper had this to say:

"The News is proud of its new home and believes it to be the handsomest and best equipped in the entire South. Publishers from other cities have been kind enough to say that nowhere in the land was there a more adequate, convenient and efficient newspaper plant. Many thousands of dollars have been expended with that end in view."1

Originally only the front three bays were built to full height, with the rear portion extending only as high as the 2nd floor. Additions to the building were completed in 1922, 1926, 1949, and 1962. In 1927 the Birmingham Age-Herald was sold to Hanson, who continued publishing both papers. In June 1940 a 200-foot tall radio antenna was erected on the roof of the News building for use by WSGN (AM 1310). The studio moved to the Dixie Carlton Hotel, and the transmitter to the Alabama State Fairgrounds the following summer.

At one point, the News used carrier pigeons to carry photographic film from Legion Field to the roof of the building.

In 1950 Scripps-Howard, which already owned the Birmingham Post bought the Age-Herald, but entered into a joint-operating agreement that moved the new Birmingham Post-Herald into the Birmingham News building. The News press printed both papers and handled advertising and subscriptions sales while the editorial and reporting staffs remained independent. The agreement lasted until the Post-Herald ceased publication in September 2005.

In 2004 the News contracted with Williams-Blackstock Architects for the design of a new headquarters building. The design was to be adaptable to any level site and it wasn't until several months later that the paper announced that it would stay downtown and build on the surface parking lot directly across 4th Avenue. The design of the new building makes reference to the 1917 structure with similar materials and proportions. An open plaza at the new building's entrance is framed on the north by the front facade of the older building.

In January 2005, the News announced that once the move was complete, it planned to demolish the 1917 building to make space for a surface parking lot for use by its employees.

On September 13, 2006 the Birmingham Design Review Committee voted unanimously to delay the demolition permit for the maximum 6 months allowed under the City's Enterprise District ordinance. Publisher Victor Hanson III explained that the building's systems were so outdated that it would cost over $17 million just to bring them to current standards. The committee's decision delayed the permit for six months "while alternatives for re-use of the building were explored".

Hanson said that since 2005 he has "heard from a number of developers expressing a desire to save the building," but that "none [have] come forward with a feasible plan." According to the News, Hanson "expressed doubt that six months more would produce such an alternative."2 On March 14, 2007 the Committee narrowly approved the request for a demolition permit with the proviso that Hanson fully document the building's exterior and interior using photography and video for the city's archives. Two weeks later, chairman Sam Frazier informed the committee that he had since learned that the building is within the boundaries of the Downtown East Redevelopment Plan, allowing the group to withhold a demolition permit indefinitely. The committee proceeded to "sustain its denial of the News' demolition request," by a unanimous vote.3

On April 11, 2007 the Board reviewed a revised proposal for a parking lot and approved demolition of the historic structure by a 5-2 vote.4 Board member Cheryl Morgan read a letter of regret into the minutes of the following meeting.5. Subsequently, chair Sam Frazier asked the city to delay the permit, saying that although the committee had approved the design of the proposed parking lot, it had not actually ruled on the demolition itself. The appeal was unsuccessful and the News received its demolition permit in July, 2007. Internal demolition of the structure began on July 16. The 3000-pound terra-cotta nameplate above the entrance, was removed intact in early September. The building was entirely leveled by the end of November

The 100-space lot with with sidewalks, landscaping, brick masonry piers and simulated wrought iron details that are reminiscent of the short-lived 2006 Birmingham News building, was completed in Spring 2008.6