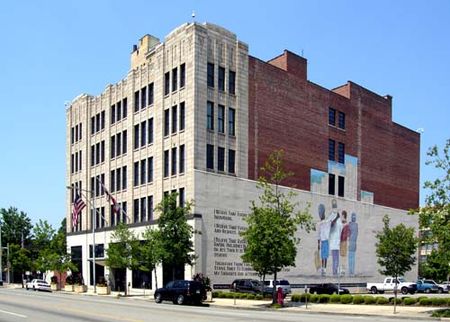 The 6-story, 97,300-square-foot building, originally built in 1928, was first known as the Drug Co. Building. By the end of the 1930s it was serving as a paper warehouse. Later the Southern Junior Business College operated out of the building, which became vacant in the mid-1980s.

The building was purchased for $375,000 to replace a 28,000 square foot administration building next to the Birmingham City Jail on 6th Avenue South. The former warehouse, which had been vacant for more than 10 years, was extensively renovated to designs by Richard Carnaggio, then with Giattina Fisher Aycock. Art-deco style detailing on the original facade, which had been concealed by a metal screen in the 1970s, was uncovered as part of the project.

Just over 69,000 square feet were renovated for immediate use while 28,000 square feet were left for future expansion. The renovation was carried out by Cleveland-based Professional Builders, Inc. The original budget was $2.8 million, but grew to $3.5 million by the time the project was completed in 1996. Funds for the work came from federal transportation grants, economic development bonds, urban renewal funds, and monies raised from confiscated items. The choice of contractors was protested by the Birmingham Association of Black Contractors, who argued that there was no guarantee that black subcontractors would be hired for the project.

Two smaller structures adjacent to the headquarters building (the Firestone Building at 1700 1st Avenue North and another building) were bought for a combined $300,000 and demolished for parking.

On September 10, 2000 a large-scale Birmingham Pledge mural, designed by Minor High School student Michael Richardson was dedicated on the east wall of the building. The mural depicts four boys, two white and two black, standing together along with the text of the "Birmingham Pledge".

In April 2008 Mayor Larry Langford and Police Chief A. C. Roper informed the Birmingham City Council that they would propose relocating police headquarters to a different building. Roper characterized the current headquarters as a "pig sty" and a "chicken coop" while Langford told the council that a tour of the building "will actually make you sick." He estimated that renovations would run to $4 –5 million while a new building could be obtained more economically. In July Langford introduced plans for a pentagon-shaped municipal building at the Trinity Park site in North Titusville which would combine the police headquarters with the Birmingham City Jail and Birmingham Police Academy as well as the Birmingham Department of Public Works and other offices. A later version of the proposal had abandoned the pentagonal shape in lieu of a series of smaller buildings more adapted to the site's terrain.