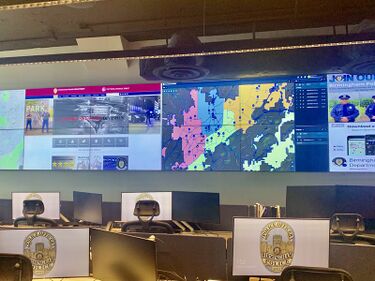 The Real Time Crime Center is anchored by a suite of "CommandCentral Aware" law enforcement software tools licensed from Motorola Solutions Inc. at a cost of $1,315,659 to be paid over five years. That expenditure was approved by the Birmingham City Council on October 20, 2020. The facility was dedicated a year later, on October 19, 2021.

Motorola's software suite includes "BriefCam" for analysis of public and private surveillance footage. Real-time sources include high-resolution video from a network of cameras installed in partnership with Alabama Power, from additional police camera installations to be determined, and from privately-operated security cameras linked to the system. Notably, the center can also process live video from police cruiser dash cameras and officers' body cameras, which can be turned on remotely from the center based on real-time geo-fencing. Expanding the number of cameras is considered a key to making full use of the technology.

The software can also analyze footage from devices recovered as evidence, or from videos posted or streamed online. According to officials, the city's software contract specifically excludes facial recognition tools, which are offered by Motorola Solutions under the "Vigilant FaceAlert" name.

Construction of the center itself was carried out by Monumental Contracting Service for $940,030, an amount approved by the City Council on January 26, 2021. The project was expected to be completed in May, but pandemic-related issues caused the opening to be delayed to October. That month the Birmingham City Council approved contracts for matching funds and service contracts to increase the number of license plate readers and high-resolution surveillance cameras, and to upgrade computer-aided dispatch technology.

In an announcement marking the first anniversary of the Real Time Crime Center, Chief Scott Thurmond shared that technology upgrades would allow more home and business surveillance cameras to be connected to the system continuously, and for the public to share video footage directly with police using Axon Citizen on the Axon Capture platform. The department also procured panoramic patrol cruiser cameras from Fleet 3 by Axon.