Logo for the Birmingham Turf Club

Program from the Birmingham Turf Club

Logo for the Birmingham Race Course

The Birmingham Race Course (originally the Birmingham Turf Club) is a former horse and greyhound racetrack which offers simulcast wagering for greyhound and thoroughbred horse races. It is located on Derby Parkway off John Rogers Drive in eastern Birmingham. It is operated by the Jefferson County Racing Association, headed by Lewis Benefield. 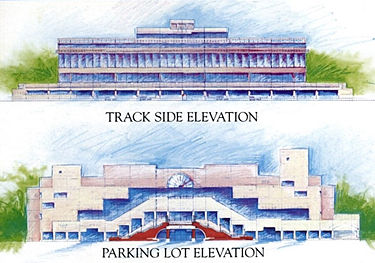 Architect's renderings of the Turf Club grandstand and clubhouse building

The project was intended as a showcase for thoroughbred horse racing in the Deep South, expected to draw crowds from neighboring states for high-stakes parimutuel betting. The city sited the project on a parcel on 7,000 acres of newly-annexed territory northeast of downtown, accessible from the recently-opened I-459 corridor. Legislation making the enterprise possible was pushed through by John Rogers (earning him the honor of having the entrance road named for him) and Fred Horn. Other investors included Judy Thompson of Thompson Tractor Company, who served as the Turf Club's general manager and Sidney Smyer Jr.

Approved in 1985 and backed in part by municipal bonds for infrastructure to the site, the 275,000 square-foot teal-accented clubhouse and other facilities were constructed over the next two years by Robins & Morton at a cost of $85 million. Architects for the project were Ewing, Cole, Cherry & Parksy, Inc. of Philadelphia, Pennsylvania. In addition to video-equipped indoor and outdoor grandstands, the clubhouse featured several lounges and an 800-seat white tablecloth restaurant dubbed "The Ascot". Georgia's Dogwood Stables brought as many as 30 horses to the Club's stables.

Ed Hall, director of the Birmingham Convention and Vistors Bureau reported that the project was expected to bring $250 million to the area in its first year, creating 1,000 jobs and triggering investments in hotels and restaurants. In his opinion the Turf Club would be "as important to Birmingham as Disney World was to Orlando."1. Jockey Willie Shoemaker was hired as pitchman for the project, recording TV commercials on horseback from the track's winner's circle to air regionally. 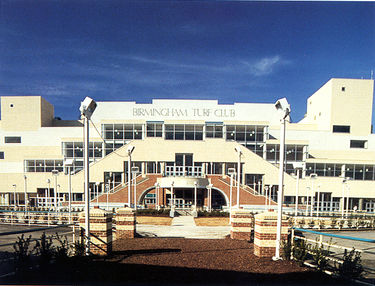 Entrance facade of the clubhouse

The track opened to the public with the Birmingham Inaugural Stakes on March 3, 1987. Through 13,000 fans came for the opening event, only 4,500 showed up the following night, and the track never drew the large crowds and large wagers its backers expected, losing up to $100,000 a day in the weeks following. A record crowd of 17,562 for the inaugural Alabama Derby on April 11 proved to be the lone high mark.

Immediately the track's owners, as well as public officials who supported the project, tried to re-brand the Turf Club as "your course", acknowledging criticism that the track was perceived as elitist. Entry fees were dropped from $2.50 to $1.00 and billboards calling the facility "your track" were erected in less affluent neighborhoods. Nevertheless, by the end of its inaugural 175-day season the track had lost $50 million and the operators filed for bankruptcy reorganization in November 1988.

Owners suggested adding dog-racing to the track, but a referendum to legalize it was defeated. The facility was sold out of bankruptcy to Delaware North, which re-instituted thoroughbred racing a year later. The track re-opened on May 26, 1989 as the Birmingham Race Course and hosted a record crowd of over 15,000 on that Friday night. Crowds and wagers again dwindled. Delaware North packed up in 1991.

Greyhound-racing magnate Milton McGregor bought the track from AmSouth Bank in 1992 and, following a successful referendum, began hosting greyhound races between horse races on a smaller infield track. With the addition of dog races, the track set a single day record betting handle of $1,726,588 on May 1, 1993. Annual total handle for the race course peaked that year at $163 million ($116 million of which was placed on dog races) and has declined each year since.

McGregor eventually abandoned live horse racing, and the last such race run on the track was on June 1, 1995. Patrons were still able to place bets on simulcast races from other tracks. By 2013 the overall handle had declined to $53 million. Continued operations have been subsidized by electronic bingo at the track and at McGregor's other facilities.

McGregor has pushed for other forms of gambling at the race course. Bills allowing referendums on casino-style gambling have been regularly introduced without success. Quincy's MegaSweeps, an "internet café" utilizing custom-built machines from Innovative Sweepstakes Systems, opened in late 2005. The operation was shut down after a few days by the Jefferson County Sheriffs Office. Jefferson County Circuit Court judge Scott Vowell later ruled that the video machines, which only offered an appearance of chance when they notified customers of winning sweepstakes tickets, were in fact legal under loopholes in Alabama law. On appeal, the Alabama Supreme Court overturned Vowell's ruling saying that because customers had to purchase the cards, that the differences in how the game operated were immaterial. The United States Supreme Court declined to review that ruling.

The former internet café and sweepstakes was renamed "Club Quincy", and continued to operate as a nightclub. In 2010 the Birmingham Racing Commission voted 3-1 to allow the track to use funds set aside to benefit horse racing to make improvements to the facility and to suspend contributions of a percentage of the total handle toward a Commission-managed charity fund. The actions were considered necessary in order to preserve the operations of the race course in the wake of the loss of electronic bingo from McGregor's other properties.

With revenues continuing to stagnate, McGregor's Jefferson County Racing Association returned to the Commission asking for $800,000 to pay for property taxes, which had been unpaid since 2011. The Alabama Horsemen's Benevolent and Protective Association's David Harrington opposed the bailout, but it passed by a 4-1 vote.

McMillan died in 2018. The facility is currently operated by his heirs. In 2019 the Birmingham Race Course was still holding live greyhound racing, but was making more money from licensing the video to foreign gambling services than it was taking from on-site betting. That year the track installed 301 electronic gambling machines that allowed visitors to wager on the results of previously-run horse races. The machines provide anonymized information about the entrants, allowing the bets to be considered a test of "skill", but not names or specific statistics that would make it possible to identify past winners.