From Bhamwiki
(Redirected from Bottletree Cafe)
Jump to: navigation, search 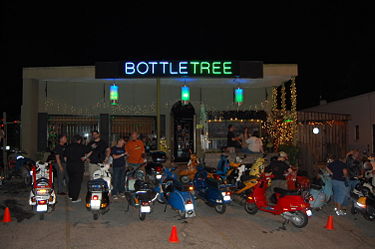 Bottletree Café was a bar, restaurant, nightclub and community arts center which operated from November 9, 2006 to March 31, 2015 at 3719 3rd Avenue South.

It was owned by sibling-partners Brad and Merrilee Challiss with partner Brian Teasley (who married Merilee in 2011). The name was intended to evoke southern folk tradition while the operation is intended to combine the best of southern hospitality with the casual lifestyle of a European neighborhood cafe (with state-of-the-art sound and video presentation).

In advance of its official grand opening, Bottletree hosted several private events, fund-raisers, and BYOB concerts. The cafe, open for lunch and dinner, featured fresh vegetarian dishes made with locally-grown produce, as well as limited deli and pub offerings. In February 2007, Bottletree's vegetarian chili won The Birmingham News Championship Chili contest, having been nominated by readers and beating out five other (non-vegetarian) finalists.

Merilee Challis, who is an accomplished visual artist, decorated the space with a wide-ranging collection of offbeat artifacts and outsider art. In addition the interior was used a gallery for contemporary shows by local artists.

In 2009, Bottletree was the official backstage caterer for City Stages. When the music festival filed for bankruptcy later that summer, Bottletree was listed as an unsecured creditor, owed $15,300. The owners and patrons of the bar held events such as a silent auction to raise funds to keep Bottletree open.

Bottletree served as the location of the awards ceremony during the Southern disComfort scooter rally in 2010. Teasley opened the Saturn Bar in Avondale in 2015. Challis sold the Bottletree building to Fresh Hospitality the same year.