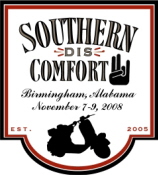 Southern disComfort was a scooter rally organized by the Birmingham Scooter Syndicate held five times between 2005 and 2012.

The rally centered around group rides around the Birmingham area, including destinations such as Barber Vintage Motorsports Museum and 29 Dreams. Events such as a slow ride and a gymkhana course were held at Sloss Furnaces. Other events took place at local restaurants and businesses.