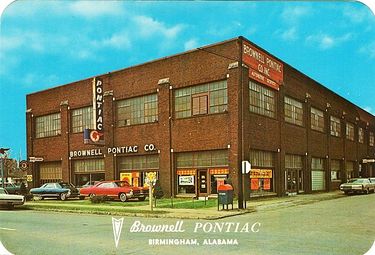 Brownell Pontiac in a 1965 postcard

The dealership was founded by Edward H. "Ted" Brownell, along with his brother Blaine and C. W. Richardson in 1914. The Brownell brothers were sons of Ford Motor Co. advertising manager Charles Brownell, who later retired to Birmingham and began a biography of his former employer.

In 1916 the business acquired the rights to the Studebaker line from Joe Anderson. In 1919 it was handling Dodge, Jordan and Master Truck. That April an article in Motor Age criticized the poor layout of the dealership, with the service department occupying a spacious ground-level area, an underutilized second-floor repair department, and a the showroom left with only enough space to display three models at a time.

By 1921 Ted Brownell chaired the committee that organized the 1921 Birmingham Automobile Show to coincide with the Semicentennial of Birmingham.

By 1927 it had secured the Dodge Brothers' and Graham Brothers' franchises and operated branch offices at 1620 3rd Avenue in Bessemer and at 2016 Avenue E in Ensley.

Blaine Brownell Jr began working at the Ensley dealership, then selling Pontiacs, in 1948 and soon became president. He sold the company when he retired in 1983.