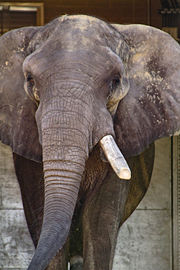 Bulwagi (born March 3, 1981 in Loxahatchee, Florida) is a male African elephant (Loxodonta africana), and currently the eldest male elephant in the "bachelor herd" at the Birmingham Zoo's Trails of Africa exhibit.

Bulwagi was born in captivity at the Lion Country Safari in Loxahatchee, Florida, near West Palm Beach. He was sired by "Peter", a male captured in Kenya in 1967 who died in 1987, and borne by "Mama" a female captured in South Africa in 1972 and now at the Dallas Zoo.

In his youth, Bulwagi damaged his right tusk in a fall. It developed a cavity and was removed by veterinarians there, leaving him one-tusked.

While at Lion Country, it was discovered that although Bulwagi was an ineffective sexual partner, he had the highest sperm count of any male elephant at an accredited US zoo, making him valuable as a stud via artificial insemination. He sired seven offspring between 2002 and 2005, three of which were stillborn and one of which died soon after birth. His surviving sons are "Louie" (born April 30, 2003 to "Renee" at the Toledo Zoo in Ohio, where he remains on exhibit), "Tamani" (born October 17, 2005 to "Ellie" at the Lowry Park Zoo in Tampa, Florida, and transferred to Birmingham in 2012) and "Kedar" (born October 18, 2005 to "Kubwa" at the Indianapolis Zoo in Indiana, where he remains on exhibit). Bulwagi's trainer, Terry Wolf, was profiled in the local press and made appearances on "The Daily Show" and "To Tell the Truth" based on his unique relationship with Bulwagi.

Bulwagi was moved to the newly opened Disney's Animal Kingdom at Lake Buena Vista, Florida, near Orlando, on February 16, 2006.

Bulwagi arrived in Birmingham on December 6, 2010 and made his way into his exhibit area early the next morning. At the time of the move, he weighed about 13,000 pounds.

Bulwagi was joined intially by Callee from the Pittsburgh Zoo and Ajani from the Indianapolis Zoo, both 19 years' Bulwagi's junior. A fourth elephant was originally planned to arrive from the Dresden Zoo in late summer, but was not brought over. Ajani and Callee were both transferred to other zoos for potential breeding in 2018 and 2019. Two younger males, Lutsandvo and Ingadze, were brought to Birmingham from the San Diego Zoo Safari Park in 2019 to join Bulwagi. Planners have said that the exhibit was designed for as many as 6 to 8 males.

In 2015 the Zoo's Director of Animal Health, Stephanie McCain, worked with UAB School of Engineering Director of Materials Processing and Development Brian Pillay to find a way to brace Bulwagi's remaining damaged tusk. Pillay and his students developed layered supports made from carbon fiber and fiber glass to encircle the tusk where it had developed a crack and also to reinforce its lateral strength. The tusk became infected later that year and most of it was surgically removed in May 2016.