Trails of Africa is a 14-acre exhibit area at the Birmingham Zoo. The $15 million project includes a 6.5-acre savannah habitat shared by several species of animals with multiple viewing areas.

The exhibit was planned to position the zoo as a leader in the care and breeding of threatened African elephants, specifically the veterinary study of bachelor herds, uncommon in zoos. A group of bull elephants is on permanent exhibit alongside red river hogs, giraffes, rhinoceroses, antelopes, zebras and ostriches. As planned, those species share the large grassland habitat with its watering and swimming areas, loosely separated by earth berms, and rotating in and out from individualized holding areas.

The exhibit is themed to enhance its educational value to visitors, with African plants and cultural elements supporting ecological and conservation lessons. A "safari cafe" and outdoor classroom areas are included, as well as a giraffe feeding station and a pachyderm encounter area for students. Announced future plans have included evening viewing hours with "enhanced moonlight".

The Birmingham City Council passed a resolution of support for the project in February 2009 and followed up with a commitment of $1.5 million per year for ten years at its June 30 meeting. A groundbreaking was held on July 29, 2009. The exhibit was opened March 2011, with a member preview held March 10 - 11 and a formal dedication on Easter weekend.

In 2021, in accordance with a Species Survival Plan developed by the Association of Zoos and Aquariums, the Birmingham Zoo transferred its three white rhinoceroses to join a larger herd at a private facility. The former rhino enclosure was expanded to include a former hippopotamus exhibit in preparation for the potential arrival of black rhinoceroses. 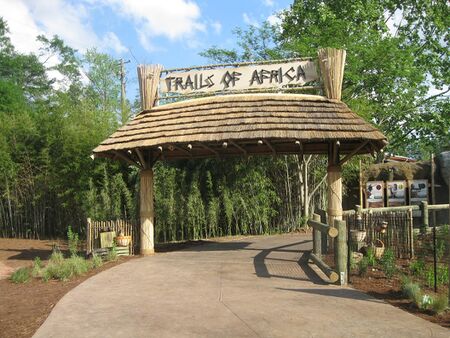