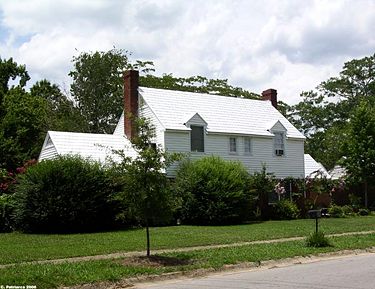 Cahaba Homestead Village (usually Cahaba Village, listed as the Cahaba Homestead Village Historic District). is a planned residential development located on the banks of the Cahaba River north of downtown Trussville (map). It was constructed between 1936 and 1938 by the Resettlement Administration on the site of the original Trussville Furnace. Originally called "Slagheap Village" because of the large slag piles covering the site, Cahaba Village became a distinct and active community during World War II. It was incorporated, along with "Old Trussville" into the City of Trussville in 1947.

Cahaba Village is roughly bounded by Rockridge Avenue to the west, the Cahaba River to the east, Gadsden Highway to the south, and Poplar Street to the north. North Chalkville Road serves as the main thoroughfare through the heart of the development. The street layout is irregular with tall oak trees lining the sidewalks.

The Cahaba Village was originally planned, by staff at the Alabama Polytechnic Institute, to be a rural community of small farmsteads raising potatoes and vegetables. By the middle of the decade it was decided to locate the community close enough to Birmingham to commute by public transit. Chicago businessman Charlie Shedd sold the 615-acre furnace property to the government for $135 an acre and work began to dismantle the furnace and other buildings. About 60 existing houses were demolished, with white residents moved to the Roper Hill community and cottages for blacks built on a 40-acre tract northwest of Cahaba Village called "Washington Heights" or, more commonly, "The Forties".

The project languished as the difficulties of farming the site presented themselves. Local landscape architect W. H. Kestler took charge of designing a denser, suburban layout with 400 houses on 1/2 to 3/4 acre lots encircling a central green space called "The Mall". The design was approved in 1936 and constructed over the following two years. In all, 243 single-family houses and 44 duplexes were constructed at a total cost of $2,661,981.26. They were rented to approved lower-middle-income families for between $14 and $23 per month. The village featured paves streets, sidewalks and landscaped park areas. An entrance gateway with a covered gazebo was built at the corner of Main Street and Parkway Drive to serve as the community's "front door".

Most of the one- and two-level homes were constructed in the American four-square style with brick and wood siding, pine floors and metal roofs. Each house had electricity, hot-and-cold running water, and a sewer connection. Two oak saplings were given to each household to beautify their yards. During World War II most families planted Victory Gardens to supplement their grocery rations.

Oak furnishings and appliances were also available to renters at a nominal cost from the government. A back porch was supplied with a hose pipe for a wringer-type washer. A communal washer was also available in a separate building on the mall. Other community facilities included a swimming pool, an elementary school and a high school, all built near the mall. A co-op store was erected near the high school, serving as a general store and lending library. Several churches were founded, including the Holy Infant of Prague Catholic Church.

The Cahaba Association, the Village residents' organization, elected community leaders, raised funds for civic projects, and published the Cahaba Hub newspaper. Many residents participated in an amateur softball league which made use of a lighted field on the mall. Resentment over the privileges given to residents of the government-funded Cahaba Village project resulted in tensions between them and the "Old Trussville" families, many of whom lacked electricity and indoor plumbing. The presence of so many community facilities within the project limited interactions between the project's residents and their neighbors.

After World War II the government made plans to sell the houses to residents. It also offered undeveloped parcels for sale, giving veterans the first option at 10 percent down. In 1947 Cahaba Village voted to incorporate their community with the newly-formed City of Trussville, helping bridge the social gap between themselves and the rest of the city.

Cahaba Village was added to the National Register of Historic Places in 2002. The project was used as a model for the Main Street Trussville development.